[Practical aspects of screening for microalbuminuria in diabetic patients]

[The complex interactions between microorganisms and humans include the well known, traditional infectious diseases and also the symbiotic relationship with the human endogenous normal flora. Forty years ago everybody was convinced that medicine would soon be able to eradicate most of the infectious diseases. Perception of victory over infectious diseases has been blunted in recent years by nosocomial infections and by the new and re-emerging diseases. The spectrum of infectious diseases is expanding and many of those once thought conquered are increasing in numbers. Moreover, the problems of infection are present in all aspects of medicine and with the field turning more and more complex its challenge for practitioners has become increasingly demanding. It is now clear, that at the dawn of the new millennium infectious disease remains the number one killer in the world. ]

[Jean Piaget's theory suggests that cognitive development proceeds in discrete steps. The first is the sensorimotor period that happens in the first two years of life. In recent years it became clear, that it is necessary to have an intact and mature hippocampus for adequate memory formation, both in experimental animals and humans. In the present study, the morphological development of the human hip pocampus was correlated with the developmental changes of intellectual development. Our results suggest that neuronal cell formation of the human hippocampus terminates several weeks before birth. In the dentate gyrus, a small number (less than 1%) of granule cells are still formed around birth. Immature granule cells migrate through the hilar region to their final position in the granule cell layer during the first six postnatal months. Light microscope studies of individual neurons indicate that connections between granule cells and their target neurons are not yet formed at birth. Such connections develop during the third postnatal year. If the development of the synaptic connections is damaged in experimental animals, the hippocampal function will be permanently impaired. Newborns may have basic synaptic circuits for memory formation, but the postnatal morphological changes suggest the significant modification of the hippocampal circuits happening continuously from the newborn age until late childhood. These changes may cause the phenomenon of the "infantile amnesia". ]

[Pathophysiology of myocardial ischemia and reperfusion]

[INTRODUCTION - Data on bone mineral density (BMD) in diabetes mellitus are contradictory in the literature. Early studies described a decreased bone mineral density in type 1 diabetes mellitus (T1DM), but recent studies report no osteopenia in T1DM.The BMD may depend on the quality of treatment for diabetes mellitus and on the presence of chronic complications. In type 2 diabetes mellitus (T2DM) the BMD is not decreased, occasionally it can even be increased. PATIENTS AND METHODS - Bone mineral density was measured in 122 regularly controlled diabetic patients (T1DM: n=73, mean age: 43.6±11.1 years,T2DM: n=49, mean age: 61.8±9.8 years) by dual energy X-ray absorptiometry at the lumbar spine and at the femur. Results were compared to those of 40 metabolically healthy control persons with a mean age of 47.5±11.9 years.The patients’ carbohydrate metabolism was assessed by the average HbA1c level of the last three years.These values were 7.9±1.4 % in T1DM, and 7.5±1.7 % in T2DM. BMDs were classified based on the T-score and Z-score using the WHO criteria. RESULTS - There was no significant difference in T1DM or in T2DM compared to the reference group in the prevalence of either osteoporosis or of osteoporosis and osteopenia combined. CONCLUSION - BMD was not found to be decreased in patients with well-controlled metabolism compared to healthy controls.]

[Summary of guidelines for American, European and International Companies in diabetes mellitus type 2 associated with hypertonia]

[The importance of hypertension in type 2 diabetes mellitus, the method of continuous blood pressure control and patient’s careas well as the forms of non-drug and drug therapy have been disclosed by presenting therapeutical recommendations from American, European scientific societies and international organizations. It has been established that the principles of care and treatment of hypertonia have basically remained unchanged in diabetes all over the world, despite the recent widespread debate over the interpretation of normal blood pressure and the consideration of the benefits of intensive or standard treatment.]

[The aim of this study was to evaluate the prevalence of albuminuria in patients under age 60 with insulin dependent diabetes mellitus (IDDM) complicated by hypertension. Among 469 patients regularly being followed for IDDM 76 were found with treated/un treated hypertension (16.2%). 62 patients from this group were investigated for urinary albumin excretion rate (AER) (24-hour timed urine collection, three times, immunoturbidimetric method). Microalbuminuria (AER 30–300 mg/day) was detected in 15 cases (24%), macroalbuminuria (AER>300 mg/day) in 11 patients (18%), whereas in 36 cases no abnormal albuminuria (AER<30 mg/day) was found. No significant differences have been found in age, duration of diabetes or metabolic control (HbA1c) among the investigated groups. The longest duration of hypertension though not statistically significant, was observed in the normoalbuminuric group. The ratio of treated/untreated patients with hypertension in normo-, micro- and macroalbuminuric groups were as follows: 23/13, 12/3 and 11/0 respectively. The maximal systolic and diastolic blood pressure values in the macroalbuminuric group, however, significantly surpassed that of the normoalbuminuric group (p<0.01). One third of normoalbuminuric patients with hypertension had no alteration in their eye-fundi. The prevalence of proliferative retinopathy and blindness rose with increasing albuminuria. These results suggest that hypertension developing in IDDM is pathogenetically heterogenous. In a significant number of IDDM patients, hypertension does not follow but rather preceeds development of incipient nephropathy. Hypertension without micro albuminuria in IDDM probably represents essential hypertension with a better prognosis related to the late complications of diabetes.]

[Authors had found diabetes mellitus type 2 in 30% of 38 886 hypertensive patients (stadium I-III). Diabetes was more frequent in case of women under 30 years. Subsequently all age groups (from 40 to 80 years) incidence was more frequently (p<0.01-0.001) in men, above 80 years again a higher ratio was in women. Presence of diabetes was correlated to rate of BMI value and systolic, diastolic pressure as well. In women - above 140 mmHg systolic pressure - the elevation was exponential. We have found a significant correlation between fasting glucose and waist. Reaching the target blood pressure is not a simply task in hypertensive patients with diabetes. The 140/90 mmHg was reached in 34.2%, 90 mmHg diastolic blood pressure in 62.3%, but the required 80 mmHg only in 16.4% of cases. Achieve the target value was quite different in the different region of our country. The major cardiovascular complications (stroke, renal disease, myocardial infarction, peripheral artery disease) have suffered a higher rate in the hypertensives with diabetes compered to hypertensives without diabetes.]

[The prognosis of patients with diabetes mellitus is mainly influenced by vascular complications which is partly due to the deterioration of the microcirculation. Laser Doppler flowmetry is a suitable method to investigate the complex disturbance that characteristic for diabetic microcirculation. This review gives a summary of the anatomical, physiological and theoretical backgrounds and the possibilities in diagnosis given by Laser Doppler flowmetry.] 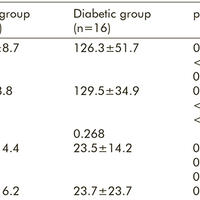 Specialists’ opinions about the introduction of colorectal cancer screening