[New approach in the treatment of elevated lipoprotein(a)] 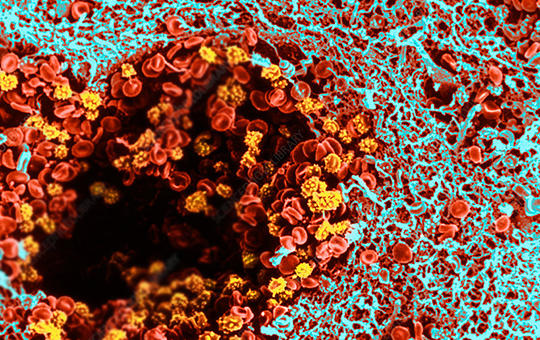 [Lipoprotein(a) is a genetic trait, resembling the structure of low density lipoprotein (LDL). Due to its high atherogenicity it is an independent risk factor for atherosclerotic vascular diseases. External impacts (as dietary and lifestyle measurements) do not decrease its plasma level thus the primary and secondary cardiovascular prevention prefers primarily the drug therapy. How­ever, widely used lipid lowering agents do not have any impact on its plasma level. Recently, the PCSK9 inhibitor monoclonal antibodies (evolocumab and alirocumab), the small interfering mRNA inclisiran, and particularly the antisense oligonucleotide targeting the LPA mRNS, further the clinical use of pelacarsen produced significant lipoprotein(a) lowering effect. Beyond the atherosclerotic vascular diseases, lipoprotein(a) plays an important role in the pathogenesis of the calcific aortic valvular stenosis, as well. The usage of the above-men­tioned biological therapies in this condition is also promising. ]

[The history of acute stroke care in Hungary ]

[Stroke is one of the most frequent causes of death and the most important cause of permanent disability worldwide and also in Hungary. The Hungarian medical literature has mentioned this disease and has been giving recommendations for its treatment since 1690. Initially folk medicines, herbal preparations and phlebotomy were used as standard therapy. Later, cooling the head joined these methods. Pharmacy preparations emerged at the middle of the 19th century. From the middle of the 20th century, products of the pharmaceutical industry like blood flow enhancers and neuroprotective drugs were in the frontline of the acute care. Anti­hy­per­ten­sive, antithrombotic and lipid-lowering medications became part of stro­ke prevention. Imaging techniques – mainly computer tomography of the brain and ultrasound examination of the cervical large arteries – have radically changed the diagnostics of cerebrovascular diseases from the middle of the 1980s. Since the 1990s, diagnostic and therapeutic decisions are based on reliable evidence from good quality clinical trials. Since the beginning of the 21st century, reperfusion treatments (intravenous thrombolysis and mechanical thrombectomy) re­present the most effective emergency care. The current direction is the extension of the therapeutic time-window of reperfusion treatments based on sophisticated neruoimaging. This review provides a brief summary of the development of stroke care in the last three and a half centuries as reflected in the Hungarian medical literature. ]

[On 31 August 2021, the European Society of Cardiology published its guideline “Prevention of cardiovascular disease in clinical practice”. This guideline provides a comprehensive review about risk factors of atherosclerotic cardiovascular disease, their assessment, potential modifiers, treatment and prevention of the cardiovascular dis­ease itself at societal and individual levels respectively. The previous guideline issued 2016, had to be updated due to the recent significant advances in risk prediction of cardiovascular disease on atherosclerotic background and due to the beneficial effects of treatment, emerging new drugs and therapeutic targets. The risk assessment system has undergone a major overhaul and now predicts the risk of fatal and non-fatal cardiovascular events together over a 10-year horizon and over a lifetime. In the new guideline, age plays a more important role in risk classification than before. The risk assessment and staged management of apparently healthy people or patients with established atherosclerotic cardiovascular disease, diabetes mellitus and other specific diseases or conditions are detailed. The positive impact of influencing risk factors, the years of life gained can recently be presented in a lifetime perspective, which will help to make an individually tailored decision on the extent of interventions, while taking into account also the patient’s preferences.]

[There is a long history of women in dentistry. Dr. Gizella Barát was the first female dentist in Hungary. She was among the first women admitted to the University in Hungary. Dr. Gizella Barát was a typical example of an emancipated, modern, wo­man, devoted to medical profession in the early 20th century. After graduation she was employed in the Polyclinic and started there her carreer at professor Armin Rott­mann. We follow her life’s story with existing however incomplete biographyc data.]

[Reading the title most of us (but not everyone) can recall from our memories the classic heroes of the movie of Sergio Leone and we can almost hear (or not?) the melody of Ennio Morricone. This sentence is full of strangeness, isn’t it? However it’s hardly at all sure that everyone had seen the movie (indeed certainly not) and the catching music is maybe elusive. Like or not we are related to classics of lipidology, as well. Most of the readers of this review of the three clinicians know much (but not everything!) of these topics but probably for some of them this paper will arise their further interest. We are going to separate the “inseparable”, only together functioning whole thing in order to build a model in our thinking regarding its operation. This is what we do with the scientific cognition. We are making models, simplifying indeed… (sometimes erroneously) proclaiming. Let’s throw out our (or at least try to do it) the stereotypes living inside us. Let’s talk about the “always” good HDL-cholesterol, the bad LDL-cholesterol and the ugly (or cruel) triglyceride, actually (and now the analogy is lost of the three key players of the classic western movie) about the other faces of the together ugly and bad lipoprotein(a) according to a lot of opinions! As everything is connected with everything in the human body and nothing is accidental - nothing can be only good, bad or ugly nor the Good, the Bad and the Ugly yet.]

Although vertigo is one of the most common complaints, intracranial malignant tumors rarely cause sudden asymmetry between the tone of the vestibular peripheries masquerading as a peripheral-like disorder. Here we report a case of simultaneous temporal bone infiltrating macro-metastasis and disseminated multi-organ micro-metastases presenting as acute unilateral vestibular syndrome, due to the reawakening of a primary gastric signet ring cell carcinoma. Purpose – Our objective was to identify those pathophysiological steps that may explain the complex process of tumor reawakening, dissemination. The possible causes of vestibular asymmetry were also traced. A 56-year-old male patient’s interdisciplinary medical data had been retrospectively analyzed. Original clinical and pathological results have been collected and thoroughly reevaluated, then new histological staining and immunohistochemistry methods have been added to the diagnostic pool. During the autopsy the cerebrum and cerebellum was edematous. The apex of the left petrous bone was infiltrated and destructed by a tumor mass of 2x2 cm in size. Histological reexamination of the original gastric resection specimen slides revealed focal submucosal tumorous infiltration with a vascular invasion. By immunohistochemistry mainly single infiltrating tumor cells were observed with Cytokeratin 7 and Vimentin positivity and partial loss of E-cadherin staining. The subsequent histological examination of necropsy tissue specimens confirmed the disseminated, multi-organ microscopic tumorous invasion. Discussion – It has been recently reported that the expression of Vimentin and the loss of E-cadherin is significantly associated with advanced stage, lymph node metastasis, vascular and neural invasion and undifferentiated type with p<0.05 significance. As our patient was middle aged and had no immune-deficiency, the promoting factor of the reawakening of the primary GC malignant disease after a 9-year-long period of dormancy remained undiscovered. The organ-specific tropism explained by the “seed and soil” theory was unexpected, due to rare occurrence of gastric cancer to metastasize in the meninges given that only a minority of these cells would be capable of crossing the blood brain barrier. Patients with past malignancies and new onset of neurological symptoms should alert the physician to central nervous system involvement, and the appropriate, targeted diagnostic and therapeutic work-up should be established immediately. Targeted staining with specific antibodies is recommended. Recent studies on cell lines indicate that metformin strongly inhibits epithelial-mesenchymal transition of gastric cancer cells. Therefore, further studies need to be performed on cases positive for epithelial-mesenchymal transition.

Far lateral lumbar disc herniations (FLDH) consist approximately 0.7-12% of all lumbar disc herniations. Compared to the more common central and paramedian lumbar disc herniations, they cause more severe and persistent radicular pain due to direct compression of the nerve root and dorsal root ganglion. In patients who do not respond to conservative treatments such as medical treatment and physical therapy, and have not developed neurological deficits, it is difficult to decide on surgical treatment because of the nerve root damage and spinal instability risk due to disruption of facet joint integrity. In this study, we aimed to evaluate the effect of transforaminal epidural steroid injection (TFESI) on the improvement of both pain control and functional capacity in patients with FLDH. A total of 37 patients who had radicular pain caused by far lateral disc herniation which is visible in their lumbar magnetic resonance imaging (MRI) scan, had no neurological deficit and did not respond to conservative treatment, were included the study. TFESI was applied to patients by preganglionic approach. Pre-treatment Visual Analogue Scale (VAS) and Oswestry Disability Index (ODI) scores of the patients were compared with the 3rd week, 3rd month and 6th month scores after the procedure. The mean initial VAS score was 8.63 ± 0.55, while it was 3.84 ± 1.66, 5.09 ± 0.85, 4.56 ± 1.66 at the 3rd week, 3rd month and 6th month controls, respectively. This decrease in the VAS score was found statistically significant (p = 0.001). ODI score with baseline mean value of 52.38 ± 6.84 was found to be 18.56 ± 4.95 at the 3rd week, 37.41 ± 14.1 at the 3rd month and 34.88 ± 14.33 at the 6th month. This downtrend of pa­tient’s ODI scores was found statistically significant (p = 0.001). This study has demonstrated that TFESI is an effective method for gaining increased functional capacity and pain control in the treatment of patients who are not suitable for surgical treatment with radicular complaints due to far lateral lumbar disc hernia.

Microdiscectomy (MD) is a stan­dard technique for the surgical treatment of lumbar disc herniation (LDH). Uniportal percutaneous full-endoscopic in­terlaminar lumbar discectomy (PELD) is another surgical op­tion that has become popular owing to reports of shorter hos­pitalization and earlier functional recovery. There are very few articles analyzing the total costs of these two techniques. The purpose of this study was to compare total hospital costs among microdiscectomy (MD) and uniportal percutaneous full-endoscopic interlaminar lumbar discectomy (PELD). Forty patients aged between 22-70 years who underwent PELD or MD with different anesthesia techniques were divided into four groups: (i) PELD-local anesthesia (PELD-Local) (n=10), (ii) PELD-general anesthesia (PELD-General) (n=10), (iii) MD-spinal anesthesia (MD-Spinal) (n=10), (iv) MD-general anesthesia (MD-General) (n=10). Health care costs were defined as the sum of direct costs. Data were then analyzed based on anesthetic modality to produce a direct cost evaluation. Direct costs were compared statistically between MD and PELD groups. The sum of total costs was $1,249.50 in the PELD-Local group, $1,741.50 in the PELD-General group, $2,015.60 in the MD-Spinal group, and $2,348.70 in the MD-General group. The sum of total costs was higher in the MD-Spinal and MD-General groups than in the PELD-Local and PELD-General groups. The costs of surgical operation, surgical equipment, anesthesia (anesthetist’s costs), hospital stay, anesthetic drugs and materials, laboratory wor­kup, nur­sing care, and postoperative me­dication diffe­red significantly among the two main groups (PELD-MD) (p<0.01). This study demonstrated that PELD is less costly than MD.