[According to The International Statistical Classification of Diseases and Related Health Problems (10th Revision, ICD 10; XIV), urogenital diseases resulted in an average 910 yearly deaths in Hungary from 2010 through 2014, less than 1% of the cumulative mortality rate. Out of all urogenital conditions, kidney and bladder diseases were the leading cause of death, accounting for nearly 85 percent of all deaths in the examined period. It should be noted that mortality due to urogenital cancers, renovascular hypertonia, diabetic nephropathy, congenital malformations and pathologies related to childbirth and pregnancy are excluded from consideration in the present review. As the Hungarian Central Statistical Office does not disclose the causes of death by age and gender at its county-level data, this paper reports gender-specific mortality rates. Due to the fact that the county-level mortality rate of urogenital diseases is low and the yearly standard deviation is high, the five-year overall mortality rate of 2010-2014 is presented. Hungarian counties differ greatly in terms of mortality from urogenital diseases. The number of deaths per 100 000 population ranges between 6.74 in Békés county and 16.38 in Fejér county. Counties within the same region may exhibit substantially different mortality rates. An overall 7.01 deaths per 100 000 population was reported in Győr-Moson-Sopron county, whereas among residents of the neighbouring Vas county the rate was reported as 14.73 per 100 000 population. The observed variations prevail even when standardised mortality rates are compared and thus the differences in the counties’ age distributions are accounted for. Regional differences become more apparent when only the deaths caused by kidney diseases are analysed out of all urogenital pathologies. In this case, two- or threefold differences are observed between the respective Hungarian counties. Major disparities are still present between counties within the same region. For example, the number of deaths per 100.000 population is 3.74 in Hajdú-Bihar county, and 8.04 in Jász-Nagykun-Szolnok county, respectively. The diagnosis frequency of kidney diseases has a strong positive correlation with case fatality, but it may not fully account for all regional variations in mortality rates. Regional characteristics of dialytic care and the accessibility of dialytic facilities is not related to patient mortality. ]

[End-of-Life Decision Situations Physician Assisted Suicide: Arguments in Legal Language – For and Against ]

[The Hospital of the Holy Spirit in Rome ]

[Curing a Fit of Laughter with Love, or a Rhapsody of Softness and Toughness ]

[Madness and Hatred, or Why is Edgardo the Exiled in the Family Crypt? ]

[In the recent years, according to international and Hungarian guidelines, in addition to lifestyle modification, metformin is the preferred initial glucose-lowering drug for most people with type 2 diabetes, if not contraindicated. Sodium glucose co­transporter-2 inhibitors have been shown to reduce progression of chronic kidney disease, or kidney failure, as well as the risk of hospitalizations for congestive heart failure and (mainly in secondary prevention) cardiovascular death in patients with type 2 diabetes. For major adverse cardiovascular events and for the renoprotection, there seems to be no class effect. On the other hand, a class effect of sodium glucose co­transporter-2 inhibitors is evident for hospitalization for heart failure. In this review the authors summarize novel data about sodium glucose cotransporter-2 inhibitors, and about their new perspectives in the near future.]

[The COVID-19 pandemic posed significant challenges to all healthcare systems of the world as created a new situations above the large number of people infected, solutions of which were lacking any previous patterns. Former experiences were specifically needed among physicians who practised usually with therapies supported by evidence based clinical experiences thus they were working along the principles of Evidence-Based Medicine. The new observations and recommendations for treating infected patients increased gradually, however they were not always well-founded by the general urgency. In this situation, physicians faced often problems of the patient’s former medications since they had to focus on the therapy of the prevalent life-threatening condition. In such cases, therapy as lipid lowering, which is inherently inimically and lightly taken, may be omitted even more often. Basic drugs of lipid lowering are statins. They are used to reduce cholesterol levels and the risk of cardiovascular events, but they have also been described as having beneficial effect on the new viral infection. In this effect, the statins beyond the well-known anti-inflammatory impact and increasing the expression of angiotensin-converting enzyme-2 further mechanisms can take part as well. These may include among others the promoted breakdown of lipid rafts, which directly inhibits the entry of coronavirus into the cell through the S protein by decreasing the level of cholesterol required for this proceeding. In a group of more than 1200 statin treated and SARS-COV-2 infected patients the overall mortality rate by the 28th day was 48% lower than among the non-statin-users. According to a meta-analysis of nearly nine thousand COVID-19-infected statin users, they had 30% lower mortality rate or serious complications. Up to date observational studies suggest that statin therapy and the administration of other lipid lowering drugs should be continued or initiated according to the guidelines also during the COVID-19 infection.]

[Supine hypertension, a consequence of autonomic neuropathy, is a rarely recognized pathological condition. Reported diseases in the background are pure autonomic failure, multiple system atrophy, Parkinson’s disease, diabetes and different autoimmune disorders. In our case report we present a case of supine hypertension which developed in a patient decades after kidney transplantation. The patient was followed for 25 months and we demonstrate the effect of the modification of antihypertensive medications. At the time of the diagnosis supine hypertension appeared immediately after laying down (office sitting blood pressure (BP): 143/101 mmHg; office supine BP: 171/113 mmHg) and on ambulatory blood pressure monitoring (ABPM) extreme reverse dipping was registered (daytime BP: 130/86 mmHg, nighttime BP: 175/114 mmHg). After the modification of the antihypertensive medications in multiple times, both office supine BP (office sitting BP: 127/92 mmHg; office supine BP: 138/100 mmHg) and on ABPM nighttime BP improved markedly (daytime BP: 135/92 mmHg, nighttime BP: 134/90 mmHg). In conclusions, our case report points out that autonomic neuropathy-caused supine hypertension and extreme reverse dipping can develop in chronic kidney disease, after kidney transplantation. The modification of the antihypertensive medications can slowly restore this pathological condition.]

[Parkinson’s disease is the elderly people’s condition which increases the risk of infections in the upper airways in its ad­vanced stages. Specific diseases (as hypertension, diabetes mellitus), older age and the male sex are significantly worsening the course of COVID-19. It would be challenging to examine parallel these diseases, since they are raising two important ques­tions. First, if Parkinson’s disease be a risk factor of COVID-19 morbidity and mortality. Se­condly, how the COVID-19 pandemic can influence the Parkinson’s disease patients. The authors are seeking answers to these questions based on the published results in the topic concerned.] 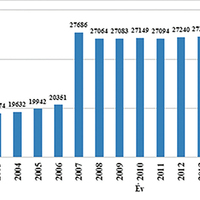 The analyses of chronic inpatient care by national, county and institutional level data