[The history of Pediatric Nurse and Caregiver training. The role of the Heim-Nurses and Calmette-Nurses] 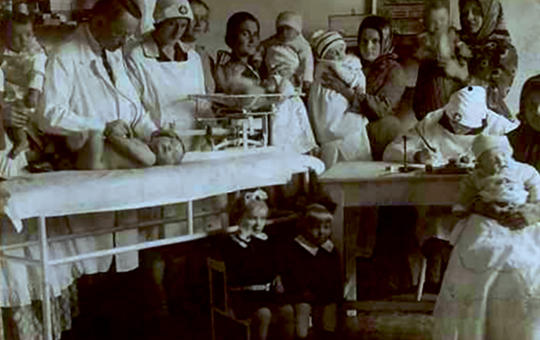 [In the early part of the 20th century in Hungary, the nursing and caregiver profession has evoled considerably, including the introduction of specializations. Pediatrician Sándor Szana, considered by literature to be founder of the training of Pediatric Caregivers, offered the first lectures in 1904 for 5 females. Later the National Stephanie Alliance came into being as a key organisation in this field from 1915. On the initiative of Pediatrician Pál Heim, the Stephanie Alliance started a Pediatric Caregiver training in 1916. Thus, the first such childcare nursing specialization was named after Pál Heim MD, and the nurses who graduated were called Heim-Nurses. In addition to the Heim-Nurses, the authors of this paper also present the activities of the Calmette Nurses. Since this period, tuberculosis (TB) has been one of the leading causes of death in Hungary.]

[Aim of the study is to assess the Quality of Life of patients with rheumatoid arthritis, who are living with chronic pain and explore what kind of experiences and attitudes they have to the music therapeutic pain relief. In the whole sample was 60 women with rheumatoid arthritis, whereof 12 people were admitted to the intervention group and 10 people to the control group. We examined socio-demographic, psychological Quality of Life variables, attitude to music and about their music therapy experiences. For the intervention group and the control group, data were recorded twice, before and after training. Statistical analysis was performed with SPSS software package 23, covering descriptive statistics, analysis of variance, paired t-test and correlation analysis (p<0,05). The psychological Quality of Life indicators of the studied RA group lag behind the population average, its members experience negative emotions, more depressed mood. The intervention using music therapy elements had the potential mainly to influence the participants’ mood positively and reduce the subjective experience of pain. Even a shorter-term intervention (13 group sessions) can trigger positive changes in the participants: improve their mood and mitigate the intensity of pain.]

[The aim of this study was to investigate the incidence of VAP in open and closed suction techniques and to determine whether closed suction techniques had altered the duration of combination antibiotic use. Quantitative, retrospective study was performed at the Central Anes­thesiology and Intensive Care Unit. A non-randomized, targeted expert study is aimed at patients in intensive care units with evidence of respiratory-related pneumonia. Data were collected from hospital records, the hospital pharmacy IT system, the NNSR system. Descriptive and mathematical statistical methods(p<0,05) were used to evaluate the results. Mean of ventilated days was 9.95±3.35. VAP was reported at an average of 4.95±2.29 days and antibiotic treatment lasted for 8.00±2.66 days. The suction technique showed with the number of intensive care days, the number of ventilation days, the average number of VAPs, and the treatment with antibiotics. The introduction of a closed suction alone did not reduce the incidence of VAP and the use of antibiotics. APN plays an important role in uncovering the risk factors for VAP and preventing its development, which ultimately leads to a reduction in mortality.]

[Restless leg syndrome, more recently renamed Willis-Ekbom disease, is a condition that disrupts sleep and occurs more frequently in the pregnant population. In women with restless legs syndrome, night cramps, and excessive daytime sleepiness were more frequent. This syndrome is a common condition that is frequently unrecognized, misdiagnosed and poorly managed. Communication aim was to present a broad summary of the latest results of international literature. Severe and untreated syndrome not only negatively affects the quality of life of patients, e.g. insomnia, excessive daytime fatigue, decreased concentration and mood, avoidance of activities requiring limited mobility, but also has a negative effect on the onset of general disease (increased anxiety and depression, cardiovascular disease and stroke).]

[The Role of the Study Nurse in clinical trials]

[The Multiple Sclerosis Registry of Szeged]

[Multiple sclerosis (MS) is a rare disease of the central nervous system considering the total population, the prevalence in Hungary is 83.9/100.000. The first MS registry was established in Denmark in the middle of the 1950’s. This was followed by the establishment of several national, then international databases with the number of enrolled patients in the hundred-thousands. At the beginning, the primary goal of the registries were the epidemiological surveys, focusing on the number of patients, the prevalence, the incidence, the mortality and the co-morbidity. As of today, however, with the rapid advancement and development of new disease modifying therapies (DMT) with different effectiveness and adverse reactions, the therapeutic use of the registries became even more essential: the modern, up-to-date, well established registries become integral part of the DMTs’ monitorization. The Multiple Sclerosis Registry of Szeged was first established as a “paper-based” database, then, in 2012, it was upgraded to an electronic, easily contactable and useable internet-based registry. As of today, it contains the socio-demographic and clinical data of more than 600 patients; we constantly add new patients as well as keep the registry up-to-date with the refreshment of old patients’ data. Aside from the “classical” clinical data, it can be used for the recording and assessment of the MRI scans and the data on psychopathological and quality of life assessments, which are becoming more and more important in everyday MS management. The establishment of the internet-based registry incredibly helped both the monitorization of the effectiveness of DMTs, and the success of the new epidemiological and psychopathological surveys. ]

[The public’s attitudes towards electroconvulsive therapy in Hungary ]

[This research focused on the knowledge and attitude toward to electroconvulsive therapy (ECT) in the general population of Hungary. There are only a few studies in the international literature focusing on the public’s attitude towards ECT, and no such study has been published from Hungary. Participants were reached through social media and asked to fill out a semi-structured questionnaire on internet that comprised seventeen questions. Participation in the survey was entirely voluntary and anonymous. Participants of the survey were not working in health care; their answers to the questionnaire were compared to those of health-care workers. The result showed a significant difference between healthcare workers’ and lay people’s knowledge and attitude towards ECT. Two third of lay participants have never heard about ECT. Those familiar with ECT were relatively well-informed about its certain aspects yet rejection of ECT was significantly higher in the group of lay participants than in health-care workers. Lay people’s incomplete knowledge and negative attitude towards ECT was confirmed by this survey. The dissemination of reliable information – which should be the shared responsibility of mental health professionals and the media – would be vitally important to disperse the prejudices and doubts about ECT.]

[May measurement month: analysis of the Hungarian results of years 2017 and 2019]

[Cardiovascular (CV) diseases are not only the leading causes of mortality in Hungary, but also the mortality rate is excessively high compared with the average of European Union, so screening programs identifying subjects with elevated blood pressure (BP) is of utmost importance. May Measurement Month (MMM) is an annual global initiative which began in 2017 aimed at raising awareness of high BP. Hungary, through the Hungarian Society of Hypertension has joined the campaign of MMM from the beginning. The results of years 2017 and 2019 are presented in this paper. ]

[In Hungary, the systematic waiting-list reduction program (“X” financing code) started in 2015 aiming to significantly reduce the waiting times of most relevant waiting lists services. The aim of this study was to evaluate the utilization and the territorial distribution of cases financed under the “X-code” between 2015 and 2018. We designed a retrospective and quantitative research on data of the Hungarian National Health Insurance Fund. Relevant data contained all publicly financed X-code cases between 2015 and 2018. Since 2015, this code covered the financing of services related to the waiting list reduction program. Processed data informed about patients (age, sex, residency at county level), involved health care facilities (name, type and location among the counties) as well as all provided medical interventions. In the study period 27,716 cases (mean age 68.05 years) were financed, the majority of patients (63.1%) was female. Case numbers per 10,000 inhabitants were the highest in Counties Baranya (84.63), Somogy (60.17), and Zala (58.89). 71.6% of patients received primary care in their residence county. The most frequent intervention was cataract surgery. During Hungary’s waiting list reduction program high number of patients received medical services. We found significant inequalities in utilization of waiting lists interventions and in the institutional engagement.]

The Role of the Study Nurse in clinical trials