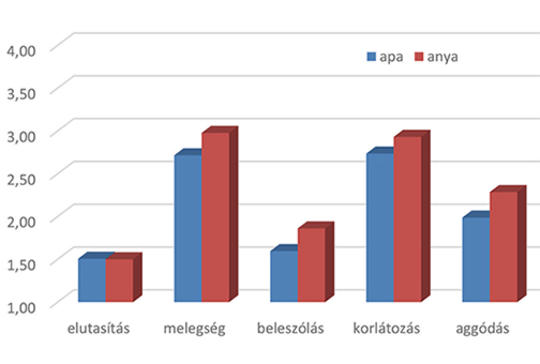 [The development of the family, family relations and family socialization play a decisive role in becoming an adult and in the development of later forms of behavior. Parental treatment is closely related to problem-solving skills, which is why they can influence adequate responses to unexpected situations in ambulance care. The aim of the study: to explore and analyze the parental attitudes and behaviors that emerged during the upbringing of outgoing ambulance workers and can be related to the demographic, socio-economic characteristics of the study sample, as well as work, workplace and health behaviors. The survey was conducted between the employees of the National Ambulance Service and the participants of the National Ambulance Professional Section of the HHCP. In addition to demographic, workplace, and health status questions, the authors surveyed a shortened, 23-question version of the Egna Minnen Beträffande Uppfostran (s-EMBU) questionnaire developed by Perris et al. SPSS version 25.0 was used for statistical analyses. Types of analyses included descriptive statistics, two-sample t-test, correlation calculation, analysis of variance. The authors found striking correlations between religion, especially school graduation and female gender, as well as restrictive and gay parental treatment. The maternal rejection and paternal overprotection have been shown to be prominent among people those working in the capital, with the correlation that the “diversity” provided by the big city is particularly conducive to breakaway behavior and good social relationships. The parental restriction, as one of the characteristic parental behaviors revealed in our research, and its positive relationship with religiosity and higher school graduation in the part of Emergency Medical officers who work in higher positions raises the possibility that the professional appearance of helping and life-saving activities is influenced by religiosity and the resulting development of moral and social sensitivity during upbringing. ]

[The aim of the presented study is to monitor the effectiveness of BLS, to investigate its effectiveness in laymen’s groups, and to compare whether non-instructional or T-CPR is more effective. Our quantitative, cross -section study was conducted on the open day of 112 Call Center in Szombathely. The target group consisted of visiting lay people who signed a statement of consent to process their observation results (n = 19). Descriptive statistics were calculated using IBM SPSS for Windows 22.0 and Fisher-exact test and independent samples T-test (p <0.05). In the case of chest compressions, all parameters examined were more effective during manual resuscitation with telephone instruction. Without instructions, it takes an average of 12 sec. from the rescue call to start the compression, in the situation where instruction takes an average of 1 m. 25 sec. Our results suggest that T-CPR takes longer to complete chest compressions than non-instructed cases, but overall, chest compressions are more effective. ]

Although vertigo is one of the most common complaints, intracranial malignant tumors rarely cause sudden asymmetry between the tone of the vestibular peripheries masquerading as a peripheral-like disorder. Here we report a case of simultaneous temporal bone infiltrating macro-metastasis and disseminated multi-organ micro-metastases presenting as acute unilateral vestibular syndrome, due to the reawakening of a primary gastric signet ring cell carcinoma. Purpose – Our objective was to identify those pathophysiological steps that may explain the complex process of tumor reawakening, dissemination. The possible causes of vestibular asymmetry were also traced. A 56-year-old male patient’s interdisciplinary medical data had been retrospectively analyzed. Original clinical and pathological results have been collected and thoroughly reevaluated, then new histological staining and immunohistochemistry methods have been added to the diagnostic pool. During the autopsy the cerebrum and cerebellum was edematous. The apex of the left petrous bone was infiltrated and destructed by a tumor mass of 2x2 cm in size. Histological reexamination of the original gastric resection specimen slides revealed focal submucosal tumorous infiltration with a vascular invasion. By immunohistochemistry mainly single infiltrating tumor cells were observed with Cytokeratin 7 and Vimentin positivity and partial loss of E-cadherin staining. The subsequent histological examination of necropsy tissue specimens confirmed the disseminated, multi-organ microscopic tumorous invasion. Discussion – It has been recently reported that the expression of Vimentin and the loss of E-cadherin is significantly associated with advanced stage, lymph node metastasis, vascular and neural invasion and undifferentiated type with p<0.05 significance. As our patient was middle aged and had no immune-deficiency, the promoting factor of the reawakening of the primary GC malignant disease after a 9-year-long period of dormancy remained undiscovered. The organ-specific tropism explained by the “seed and soil” theory was unexpected, due to rare occurrence of gastric cancer to metastasize in the meninges given that only a minority of these cells would be capable of crossing the blood brain barrier. Patients with past malignancies and new onset of neurological symptoms should alert the physician to central nervous system involvement, and the appropriate, targeted diagnostic and therapeutic work-up should be established immediately. Targeted staining with specific antibodies is recommended. Recent studies on cell lines indicate that metformin strongly inhibits epithelial-mesenchymal transition of gastric cancer cells. Therefore, further studies need to be performed on cases positive for epithelial-mesenchymal transition.

[About the care of patients with hyperuricaemia and gout]

[This consensus document is intended to provide guidance for the effective and efficient treatment of asymptomatic individuals with high uric acid levels and gout patients.]

[What happens to vertiginous population after emission from the Emergency Department?]

[Background – Dizziness is one of the most frequent complaints when a patient is searching for medical care and resolution. This can be a problematic presentation in the emergency department, both from a diagnostic and a management standpoint. Purpose – The aim of our study is to clarify what happens to patients after leaving the emergency department. Methods – 879 patients were examined at the Semmel­weis University Emergency Department with vertigo and dizziness. We sent a questionnaire to these patients and we had 308 completed papers back (110 male, 198 female patients, mean age 61.8 ± 12.31 SD), which we further analyzed. Results – Based on the emergency department diagnosis we had the following results: central vestibular lesion (n = 71), dizziness or giddiness (n = 64) and BPPV (n = 51) were among the most frequent diagnosis. Clarification of the final post-examination diagnosis took several days (28.8%), and weeks (24.2%). It was also noticed that 24.02% of this population never received a proper diagnosis. Among the population only 80 patients (25.8%) got proper diagnosis of their complaints, which was supported by qualitative statistical analysis (Cohen Kappa test) result (κ = 0.560). Discussion – The correlation between our emergency department diagnosis and final diagnosis given to patients is low, a phenomenon that is also observable in other countries. Therefore, patient follow-up is an important issue, including the importance of neurotology and possibly neurological examination. Conclusion – Emergency diagnosis of vertigo is a great challenge, but despite of difficulties the targeted and quick case history and exact examination can evaluate the central or peripheral cause of the balance disorder. Therefore, to prevent declination of the quality of life the importance of further investigation is high.]