[Psychooncology in the everyday practice]

[In the past 40 years the progressively growing fi eld of psychooncology has played an increasing role in the multidisciplinary practice of oncology. In this review methods for identifying and treating cancer patients’ psychological challenges will be summarized. Effective psychological interventiones will be discussed, and two methods especially devised for supporting cancer patients (Simonton Training and Mindfulness Based Cancer Recovery) will be introduced. We also deal with the communication traits that affect the doctor-patient relationship, the mental challenges that affect doctors dealing with terminally ill patients, burnout and its prophylaxis.]

[Treatments of brain tumors in adults – an up-date]

[Maximal safe resection is the fi rst step in the complex neurooncological therapy of adult brain tumors. Surgical management of brain tumors, including the surgical innovations (neuronavigation, intraoperative imaging, awake craniotomy, intraoperative electrophysiology) providing more radical resection with the safe preservation of neurological functions will be presented. In case of malignancy the surgery is followed by radiation and chemotherapy. In this review we describe the postoperative adjuvant therapeutical modatilites available for primary and metastatic tumors, emphasizing the modern chemotherapy of high grade gliomas and stereotactic radiosurgery of brain metastases. As a conclusion we summerize the guidelines and modalities for the most common adult brain tumors, according to histological type and grade.]

[Treatments of brain tumors in adults – an up-date]

[The prognosis of brain metastases is very poor. Surgery and radiotherapy provides the fi rst line treatment, while systemic therapy has limited value. Nevertheless, our knowledge is increasing: normal cells contribute signifi cantly to the homing and growth of tumor cells; the molecular profi le of the primary tumor and its metastases could be different, which infl uences the therapeutic strategies; the type of blood supply can change during the tumor growth. It would be very important to optimize the cooperation of the different therapeutic modalities, and to fi nd markers which could predict the risk of metastatization.]

[Gastroenteropancreatic neuroendocrine tumors (GEP-NETs) are unusual and relatively rare neoplasms. They characteristically synthetize, store and secrete a variety of peptides and neuroamines, which can lead to development of disctinct clinical syndromes. Clinical symptoms and presentations vary depending on the location and hormones produced by the tumor. The diagnosis of NETs is established by histological examination and the immunohistochemical detection of general neuroendocrine markers, such as chromogranin A (CgA) and synaptophysin. An update of the WHO classifi cation has resulted in a new classifi cation dividing neuroendocrine neoplasms into neuroendocrine tumors (NETs) including G1 (Ki67 index ≤2%) and G2 (Ki67 index 3-20%) tumors and neuroendocrine carcinomas (NECs) with Ki67 index >20%, G3. The different available therapeutic approaches, including surgery, liver-directed ablative therapies, peptide receptor radionuclide therapy, and systemic hormonal, cytotoxic or targeted therapy, are discussed in this overview.]

[Development in the treatment of non-operable, metastatic colorectal cancer]

[Today, due to the steady improvement, the survival of patients with non-operable, metastasic colorectal cancer is about 30 months. This review discusses the results of recent clinical trials, the new drugs, the treatment protocols as well as the tumor response after surgery. A suggestion will be made not only on an optimal treament strategy, but also how to increase the survival, and the feasibility of a secunder resection.]

[The examination of burnout among healthcare workers]

[Health reforms in recent decades have been largely based on economic considerations and have led to a significant problem in the sector today, with the issue of human resources being pushed back, which is exacerbated by burnout syndrome. The aim of this questionnaire-based study was to examine the complex background of burnout among health care workers in the cities of Komló, Pécs and Kecskemét. Baseline demographic data were recorded. Burnout was assessed by the Maslach Burnout Inventory (MBI), and the intensity of dysfunctional attitudes were also studied. Depression was detected by the Beck Scale and social supports, and effort-reward dysbalance were also examined. Overall 411 employees participated in our study. Age group distribution was middle aged access, vast majority of the workers was between 36 and 55 years. Mean burnout scale was 58.6 (SD = 16.3), 63 workers had mild (14.2%), 356 had moderate (80.7%) and 22 had severe (5.1%) burnout. In a multivariate analysis the type of work (OR = 1.018), age (OR = 2.514), marital status (OR = 1.148), job type (OR = 1.246) the lack of social support (OR = 1.189) and allowance (OR = 9.719) were independently associated with burnout (p < 0.05 in all cases). There was a significant association among burnout, depression and dysfunctional attitudes. The vast majority of our social workers suffered from moderate and a small, but significant proportion suffered from severe burnout. Our work draws attention to the modifiable and unmodifiable risk factors of burnout in this population, which may help in the development of preventive strategies.]

[The improvement of the Hungarian hospice network and the increasing number of people dealing with the seriously ill are reflected by the annual hospice reports (2001-2013). However these reports also draw the attention to the cumulating mental and spiritual burdens of carers which can lead to fatigue and burnout. On the base of practical experience we surveyed the mental and spiritual condition of the caregivers of seriously ill patients and also reviewed research findings and the professional literature on the exposure to imperilment. The grounds of professional literature’s research were the Hungarian and international databases. We favoured studies published in Hungarian or English between 2000 and 2014 primarily on carers working in palliative and hospice service. One of the main profits of reviewing the professional literature is getting more detailed information on the mental state of professional caregivers. Relatively new element in researches is studying the relation between burnout and compassion satisfaction and compassion fatigue. It includes studying of symptoms and coping strategies. These all enable a better understanding of causes and help us to support hospice carers with more effective methods to protect them from mental and spiritual exhaustion.]

[Actual place and role of communication in Hungarian oncology]

[The move to shared decision model from the patriarchal model of doctor-patient relationship is a communication challenge for doctors and patients as well. Communication is extremely important in Oncology, because the suggestive effect of every action of doctors and nurses is outstanding in this fi eld of healthcare. This burden has to urge professionals to self-improvement. One of the most important success of the Doctor-Patient Relationship program of the Hungarian Hospice Foundation since its launch in 2014 is the statement of two clinical centres on the importance of communication skills in everyday praxis, and engaging themselves in self-improvement. The successful cooperation also depends on patients and their care-givers not just on professionals. To gain all the necessary information is a learning process for them; even as to fi nd out the depth of information and decision level they wish. The patient who is satisfied with his or her own communication in healthcare is less distressed than the one who feels like adrifting. That gives the sense of achievement to professionals as well.] 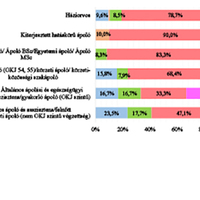