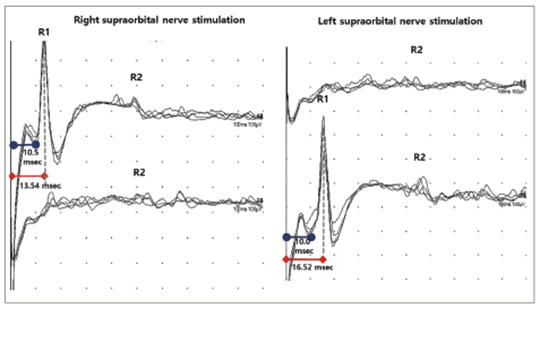 A cross-sectional study on the quality of life in migraine and medication overuse headache in a Hungarian sample: understanding the effect of headache characteristics

Previous studies using generic and disease specific instruments showed that both migraine and medication overuse headache are associated with lower health-related quality of life (HRQoL). The aim of our study was to assess HRQoL differences in migraineurs and in patients with MOH and to examine how headache characteristics such as years with headache, aura symptoms, triptan use, headache pain severity and headache frequency are related to HRQoL. In this cross-sectional study 334 participants were examined (248 were recruited from a tertiary headache centre and 86 via advertisements). The Comp­rehensive Headache-related Quality of life Questionnaire (CHQQ) was used to measure the participants’ HRQoL. Data showed normal distribution, therefore beside Chi-squared test parametric tests (e.g. independent samples t-test) were used with a two-tailed p<0.05 threshold. Linear regression models were used to determine the independent effects of sex, age, recruitment method, headache type (migraine vs. MOH) and headache characteristics (presence of aura symptoms, years with headache, headache pain severity, headache frequency and triptan use) separately for each domain and for the total score of CHQQ. Significance threshold was adopted to p0.0125 (0.05/4) to correct for multiple testing and avoid Type I error. Independent samples t-tests showed that patients with MOH had significantly lower scores on all CHQQ domains than migraineurs, except on the social subscale. Results of a series of regression analyses showed that triptan use was inversely related to all the domains of HRQoL after correction for multiple testing (p<0.0125). In addition, headache pain severity was associated with lower physical (p=0.001) and total scores (p=0.002) on CHQQ subscales. Based on the results, different headache characteristics (but not the headache type, namely migraine or MOH) were associated with lower levels of HRQoL in patients with headache. Determining which factors play significant role in the deterioration of HRQoL is important to adequately manage different patient populations and to guide public health policies regarding health service utilization and health-care costs.

The incidence of brachial plexus palsy (BPP) has decreased recently, but the indivi­d­ual’s quality of life is endangered. To provide better chan­ces to BPP neonates and infants, the Department of Developmental Neurology worked out, introduced, and applied a complex early therapy, including nerve point stimulation. After diagnosing the severity of BPP, early intensive and complex therapy should be started. Appro­x­imately after a week or ten days following birth, the slightest form (neurapraxia) normalizes without any intervention, and signs of recovery can be detected around this period. The therapy includes the unipolar nerve point electro-stimulation and the regular application of those elemen­tary sensorimotor patterns, which activate both extremities simultaneously. With the guideline worked out and applied in the Department of Developmental Neurology, full recovery can be achieved in 50% of the patients, and even in the most severe cases (nerve root lesion), functional upper limb usage can be detected with typically developing body-scheme. Immediately starting complex treatment based on early diagnosis alters the outcome of BPP, providing recovery in the majority of cases and enhancing the everyday arm function of those who only partially benefit from the early treatment.

[Telecare in Parkinson’s disease: A nationwide survey among Hungarian neurologists ]

[COVID-19 has made providing in-person care difficult. In most countries, including Hungary, telemedicine has partly served as a resolution for this issue. Our purpose was to explore the effects of COVID-19 on neurological care, the knowledge of neurology specialists on telemedicine, and the present state of telecare in Hungary, with a special focus on Parkinson’s disease (PD). Between July and October 2021, a nationwide online survey was conducted among actively practicing Hungarian neurology specialists who were managing patients with PD. A total of 104 neurologists were surveyed. All levels of care were evaluated in both publicly funded and private healthcare. Both time weekly spent on outpatient specialty consultation and the number of patients with PD seen weekly significantly decreased in public healthcare, while remained almost unchanged in private care (p<0.001); higher portion of patients were able to receive in-person care in private care (78.8% vs. 90.8%, p<0.001). In telecare, prescribing medicines has already been performed by the most (n=103, 99%). Electronic messages were the most widely known telemedicine tools (n=98, 94.2%), while phone call has already been used by most neurologists (n=95, 91.3%). Video-based consultation has been more widely used in private than public care (30.1% vs. 15.5%, p=0.001). Teleprocedures were considered most suitable for monitoring progression and symptoms of Parkinson’s disease and evaluating the need for adjustments to antiparkinsonian pharmacotherapy. COVID-19 has had a major impact on the care of patients with PD in Hungary. Telemedicine has mitigated these detrimental effects; however, further developments could make it an even more reliable component of care.]

Multiple sclerosis is an autoimmune disease of the central nervous system, with myelin degeneration and Relapsing-Remitting Multiple Sclerosis (RRMS) as the most common type. The aim of this study was to determine the levels of Neurofilament Light Chain (NFL) and Orexin-A (OXA) in patients with RRMS and compare it with healthy control subjects’ data. In this case-control study of 61 subjects, serum and cerebrospinal fluid samples were collected from 23 RRMS patients and 38 healthy control subjects. NFL and OXA levels were determined in cerebrospinal fluid and serum samples using enzyme-linked immunosorbent assay kits. Self-reported questionnaires were also administered to evaluate fatigue severity and impact. Receiver operating characteristic curve analysis was used to determine the optimal cut-off value of NFL and OXA. The NFL and OXA concentrations in cerebro­spinal fluid of RRMS patients were significantly higher than those of the control group (p < 0.001), but no sig­nificant difference was found in the serum concentrations (p = 0.842, p = 0.597, respectively). The cut-off values were found to be 1.194 ng/ml for NFL and 77.81 pg/ml for OXA in cerebrospinal fluid. A positive correlation was found between the Expanded Disability Status Scale and Epworth Sleepiness Scale in RRMS patients (ρ = 0.49, p = 0.045). These results suggest that increased levels of both NFL and OXA in cerebrospinal fluid reflect neuronal destruction in RRMS. Further research of neurodegeneration should focus on neuropeptides to determine the possible roles in RRMS pathogenesis.

COVID-19 can cause blink reflex abnormalities

Neurological symptoms and complications associated with coronavirus 2019 (COVID-19) are well known. It was aimed to evaluate the brainstem and trigeminal/facial nerves and the pathways between these structures in COVID-19 using the blink reflex test. Thirty patients with post COVID-19 (16 males, 14 females) and 30 healthy individuals (17 males, 13 females) were included in this prospective study. Individuals who previously had a positive nose swap polymerase chain reaction test for severe acute respiratory syndrome coronavirus 2 and whose previously clinical features were compatible with COVID-19 were included in the post COVID-19 patient group. Neurological examination of the participants should be normal. Blink reflex test was performed on all participants. R1, ipsilateral R2 (IR2), and contralateral R2 (CR2) waves obtained from the test were analyzed. The mean ages of healthy individuals and post COVID-19 patients were 34.0±6.4 and 38.4±10.6 years, respectively. Both age and gender were matched between the groups. R1, IR2, and CR2 latencies/amplitudes were not different between the two groups. The side-to-side R1 latency difference was 0.5±0.3 and 1.0±0.8 ms in healthy individuals and post COVID-19 patients, respectively (p=0.011). One healthy individual and 12 patients with post COVID-19 had at least one abnormal blink reflex parameter (p=0.001). This study showed that COVID-19 may cause subclinical abnormalities in the blink reflex, which includes the trigeminal nerve, the seventh nerve, the brainstem, and pathways between these structures.

[The purpose of our study was to evaluate the role of three dimensional time of flight magnetic resonance angiography in detection of neurovascular compression in patients with trigeminal neuralgia. 53 patients (26 males, 27 females mean age 57 years) with trigeminal neuralgia underwent 3D TOF MRA. Examinations were performed on 0.5 T Elscint Gyrex V Dlx equipment. The imaging parameters were 33-38/9/25 TR/TE/flip angle with 30-50 mm slab thickness and 1-1.5 mm slice thickness. Contrast material was administered in every case. Maximum intensity projection and thin slice reconstruction (pixel by pixel) were performed in three standard directions (axial, coronal and sagittal). To evaluate the presence or absence of vascular contact, we used both the source slices and reconstructed pictures. Vascular contact with the trigeminal nerve in the entry zone was identified on the symptomatic side in 26 cases (superior cerebellar artery in 20, superior cerebellar artery and vein in one, anterior inferior cerebellar artery in 2, basilar artery or a vein in 1-1 case) and on the asymptomatic side in 3 cases (superior cerebellar arteries). No contact was detected in 24 patients. The examination was not of diagnostic value in three cases, because of head motion artefacts. Veins were better visualized on the contrast pictures. Microvascular decompression sec. Janetta was performed in 9 cases. The surgical and neuroradiological findings were identical in every case. Complete pain relief or significant diminshing of the symptoms were achieved following surgery in all patients. 3D TOF MRA is a useful method in demonstration of vascular contact with the trigeminal nerve at the entry zone, which is valuable information in planning surgical treatment for patients with trigeminal neuralgia.]

Sandhoff disease is a rare type of hereditary (autosomal recessive) GM2-gangliosidosis, which is caused by mutation of the HEXB gene. Disruption of the β subunit of the hexosaminidase (Hex) enzyme affects the function of both the Hex-A and Hex-B isoforms. The severity and the age of onset of the disease (infantile or classic; juvenile; adult) depends on the residual activity of the enzyme. The late-onset form is characterized by diverse symptomatology, comprising motor neuron disease, ataxia, tremor, dystonia, psychiatric symptoms and neuropathy. A 36-year-old female patient has been presenting progressive, symmetrical lower limb weakness for 9 years. Detailed neurological examination revealed mild symmetrical weakness in the hip flexors without the involvement of other muscle groups. The patellar reflex was decreased on both sides. Laboratory tests showed no relevant alteration and routine electroencephalography and brain MRI were normal. Nerve conduction studies and electromyography revealed alterations corresponding to sensory neuropathy. Muscle biopsy demonstrated signs of mild neurogenic lesion. Her younger brother (32-year-old) was observed with similar symptoms. Detailed genetic study detected a known pathogenic missense mutation and a 15,088 base pair long known pathogenic deletion in the HEXB gene (NM_000521.4:c.1417G>A; NM_000521:c.-376-5836_669+1473del; double heterozygous state). Segregation analysis and hexosaminidase enzyme assay of the family further confirmed the diagnosis of late-onset Sandhoff disease. The purpose of this case report is to draw attention to the significance of late-onset Sandhoff disease amongst disorders presenting with proximal predominant symmetric lower limb muscle weakness in adulthood.

COVID-19 can cause blink reflex abnormalities

[Nurses’ opinion about Covid-19 vaccines during the pandemic]

[What is the origin of expression of „Védőnő” – Maternal Childhealth Nurse?]