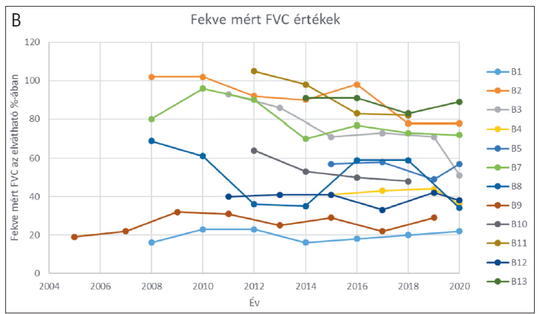 [Pompe disease (PD) is a rare lysosomal disease caused by the deficient activity of acid alpha-glucosidase (GAA) enzyme due to mutations in the GAA gene. The enzymatic deficiency leads to the accumulation of glycogen within the lysosomes. Clinically, the disease has been classically classified in infantile and childhood/adult forms. Presently cc. close to 600 mutations distributed throughout the whole gene have been reported. The c.-32-13T>G splice mutation that is very common in patients of Caucasian origin affected by the childhood/adult form of the disease, with an allelic frequency close to 70%. Enzyme replacement treatment (ERT) is available for the patients with Pompe disease (Myozyme). In this paper, we are presenting the long term follow up of 13 adult onset cases treated more than 5 years. The longest follow up was 15 years. To evaluate the treatment efficacy, the 6 minutes walking test (6MWT) and the respiratory functions were monitored annually. The analysis revealed that at the beginning of ERT for 3-4 years the 6MWT had been generally increasing, then it declined, and after 10 years it was lower in 77% of the cases than it had been at the start of the treatment. In 23% of the cases the 6MWT increased during the follow up time. Only one of the patients become wheelchair dependent during the follow-up period. The respiratory function showed similar results especially in supine position. A high degree of variability was observed among patients in their responses to the treatment, which only partially associated with the antibody titer against the therapeutic protein. The efficacy of the ERT was associated with the type of the disease causing mutation, the baseline status of the disease, the lifestyle and the diet of the patient. The long-term follow up of the patients with innovative orphan drugs is necessary to really understand the value of the treatment and the need of the patients.]

[By the spring of 2020 the COVID-19 outbreak caused by the new SARS-CoV-2 coronavirus has become a pandemic, requiring fast and efficient reaction from societies and health care systems all over the world. Fever, coughing and dyspnea are considered the major signs of COVID-19. In addition to the involvement of the respiratory system, the infection may result in other symptoms and signs as well. Based on reports to date, neurological signs or symptoms appear in 30-50% of hospitalized COVID-19 patients, with higher incidence in those with more severe disease. Classical acute neurological syndromes have also been reported to associate with COVID-19. A drop in the volume of services for other acute diseases has been described in countries with healthcare systems focusing on COVID-19. During the COVID-19 epidemic it is also important to provide appropriate continuous care for those with chronic neurological disorders. It will be the task of the future to estimate the collateral damage caused by the COVID-19 epidemic on the outcome of other neurological disorders, and to screen for the possible late neurological complications of the SARS-CoV-2 coronavirus infection.]

Creutzfeldt-Jakob Disease: A single center experience and systemic analysis of cases in Turkey

We aimed to analyze the clinical, laboratory and neuroimaging findings in patients with sporadic Creutzfeldt-Jakob disease (CJD) in a single center as well as to review other published cases in Turkey. Between January 1st, 2014 and June 31st, 2017, all CJD cases were evaluated based on clinical findings, differential diagnosis, the previous misdiagnosis, electroencephalography (EEG), cerebrospinal fluid and cranial magnetic resonance imaging (MRI) findings in our center. All published cases in Turkey between 2005-2018 were also reviewed. In a total of 13 patients, progressive cognitive decline was the most common presenting symptom. Two patients had a diagnosis of Heidenhain variant, 1 patient had a diagnosis of Oppenheimer-Brownell variant. Seven patients (53.3%) had been misdiagnosed with depression, vascular dementia, normal pressure hydrocephalus or encephalitis. Eleven patients (87%) had typical MRI findings but only 5 of these were present at baseline. Asymmetrical high signal abnormalities on MRI were observed in 4 patients. Five patients (45.4%) had periodic spike wave complexes on EEG, all appeared during the follow-up. There were 74 published cases in Turkey bet­ween 2005 and 2018, with various clinical presentations. CJD has a variety of clinical features in our patient series as well as in cases reported in Turkey. Although progressive cognitive decline is the most common presenting symptom, unusual manifestations in early stages of the disease might cause misdiagnosis. Variant forms should be kept in mind in patients with isolated visual or cerebellar symptoms. MRI and EEG should be repeated during follow-up period if the clinical suspicion still exists.

Autonomic nervous system may be affected after carpal tunnel syndrome surgery: A possible mechanism for persistence of symptoms after surgery

After carpal tunnel surgery, some patients report complaints such as edema, pain, and numbness. Purpose – The aim of this study was to evaluate autonomic nervous system function in patients with a history of carpal tunnel surgery using sympathetic skin response (SSR). Thirty three patients (55 ±10 years old) with a history of unilateral operation for carpal tunnel syndrome were included in the study. The SSR test was performed for both hands. Both upper extremities median and ulnar nerve conduction results were recorded. A reduced amplitude (p=0.006) and delayed latency (p<0.0001) were detected in the SSR test on the operated side compared to contralateral side. There was no correlation between SSR and carpal tunnel syndrome severity. Although complex regional pain syndrome does not develop in patients after carpal tunnel surgery, some of the complaints may be caused by effects on the autonomic nervous system.

[Family planning is an exceptionally important question in multiple sclerosis, as women of childbearing age are the ones most often affected. Although it is proven that pregnancy does not worsen the long-term prognosis of relapsing-remitting multiple sclerosis, many patients are still doubtful about having children. This question is further complicated by the fact that patients – and often even doctors – are not sufficiently informed about how the ever-increasing number of available disease-modifying treatments affect pregnancies. Breastfeeding is an even less clear topic. Patients usually look to their neurologists first for answers concerning these matters. It falls to the neurologist to rationally evaluate the risks and benefits of contraception, pregnancy, assisted reproduction, childbirth, breastfeeding and disease modifying treatments, to inform patients about these, and then together come to a decision about the best possible therapeutic approach, taking the patients’ individual family plans into consideration. Here we present a review of relevant literature adhering to international guidelines on the topics of conception, pregnancy and breastfeeding, with a special focus on the applicability of approved disease modifying treatments during pregnancy and breastfeeding. The goal of this article is to provide clinicians involved in the care of MS patients with up-to-date information that they can utilize in their day-to-day clinical practice. ]

[The importance of patient reported outcome measures in Pompe disease]

[In recent decades it has become increasingly important to involve patients in their diagnostic and treatment process to improve treatment outcomes and optimize compliance. By their involvement, patients can become active participants in therapeutic developments and their observations can be utilized in determining the unmet needs and priorities in clinical research. This is especially true in rare diseases such as Pompe disease. Pompe disease is a genetically determined lysosomal storage disease featuring severe limb-girdle and axial muscle weakness accompanied with respiratory insufficiency, in which enzyme replacement therapy (ERT) now has been available for 15 years. In our present study, patient reported outcome measures (PROMs) for individuals affected with Pompe disease were developed which included questionnaires assessing general quality of life (EuroQoL, EQ-5D, SF36), daily activities and motor performance (Fatigue Severity Score, R-PAct-Scale, Rotterdam and Bartel disability scale). Data were collected for three subsequent years. The PROM questionnaires were a good complement to the physician-recorded condition assessment, and on certain aspects only PROMs provided information (e.g. fatigue in excess of patients’ objective muscle weakness; deteriorating social activities despite stagnant physical abilities; significant individual differences in certain domains). The psychological effects of disease burden were also reflected in PROMs. In addition to medical examination and certain endpoints monitored by physicians, patient perspectives need to be taken into account when assessing the effectiveness of new, innovative treatments. With involvement of patients, information can be obtained that might remain uncovered during regular medical visits, although it is essential in determining the directions and priorities of clinical research. For all orphan medicines we emphasize to include patients in a compulsory manner to obtain general and disease-specific multidimensional outcome measures and use them as a quality indicator to monitor treatment effectiveness.]

[Pompe disease is a rare lysosomal storage disease inherited in a recessive manner resulting muscular dystrophy. Due to the lack of the enzyme alpha glucosidase, glycogen accumulates in the cells. In the infantile form of Pompe disease hypotonia and severe cardio-respiratory failure are common leading to death within 2 years if left untreated, while the late-onset form is characterized with limb-girdle and axial muscle weakness accompanied with respiratory dysfunction. Pompe disease has been treated with regular intake of the missing enzyme since 2006, which significantly improved the survival and severity of symptoms in patients of both subtypes. The enzyme replacement therapy (ERT) is safe and well tolerated. However, limited data are available on its use in pregnancy. Our goal is to share our experience and review the literature on the safety of enzyme replacement therapy for Pompe disease during pregnancy and post partum.]