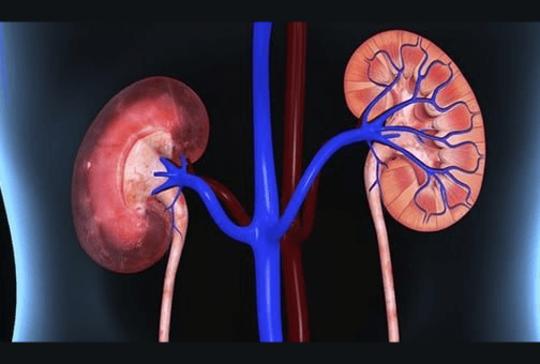 [The most common monogenic nephropathy is a congenital, cystic, bulky process in the kidney that leads to a gradual deterioration in renal function. Renal failure is often associated with cystic liver or pancreatic lesions, cerebral artery aneurysm, or mitral prolapse.]

[Vascular stroke is a very frequent cause of morbidity and mortality, and in patients who suffered stroke subsequent long-term neurological deficit of greater or lesser extent is an important factor. Numerous clinical and epidemiological studies confirmed that elevated systemic blood pressure is among the main risk factors of both ischemic and hemorrhagic vascular stroke, the effects of arterial hypertension being very complex including morphological and functional changes in vessels and vascular circulation. In our retrospective analysis of 218 patients hospitalized for stroke we found arterial hypertension in 91.2% of subjects and atrial fibrillation in 32.1% of subjects. 182 patients (83.5%) have been diagnosed with ischemic stroke and 36 patients (16.5%) with hemorrhagic stroke. In the group of patients with atrial fibrillation, only 33 patients (47.1%) were treated by anticoagulants, what points out an inadequate indication of anticoagulant treatment when considering the stroke risk calculation for atrial fibrillation (CHA2DS2- VASc Score) and bleeding risk (HAS-BLED Calculator for Atrial Fibrillation). It is also noteworthy that in the group of patients with anticoagulant therapy who have developed ischemic stroke in spite of this treatment, we found that in 48.5% the treatment was underdosed and therefore ineffective. Our work points to the need to improve the effective management of arterial hypertension and atrial fibrillation, the most common modifiable factors of vascular strokes.]

[Introduction: Earlier studies have shown that cardiovascular (CV) mortality and morbidity in chronic kidney disease (CKD) often exceed their average population, and left ventricular hypertrophy (LVH) is an independent risk factor for CV disease. However, in CKD, the relationship between LVH, arterial stiffness (AS) and renal function has not yet been fully elucidated. Little data is available on their prognostic role. Aims of our study a) cross-sectional examination of the relationship between left ventricular mass index (LVMI), arterial vascular stiffness, and renal function, b) in our follow-up study, clarification of the LVMI, the prognostic role of AS in patients with CKD, IgA nephropathy (IgAN). Methods: In our cross-sectional study, 79 IgAN patients were examined in our clinic. The myocardial mass index (LVMI) was determined using an estimation formula after echocardiographic measurements. Arterial stiffness was measured using a photoplethizmography technique (PulseTrace) and characterized by the stiffness index (SI). The MDRD formula was used to estimate renal function (GFR) (eGFR, ml/min/1.73 m2). In the prognostic study the primary combined endpoint was total mortality, the most important CV events (stroke, myocardial infarction or cardiovascular interventions such as revascularization) and end stage renal disease. Secondary endpoints were CV and renal endpoints separately. Results: Of the 79 patients included in our cross-sectional study, 50 were men, with an average age of 46 ± 11 years. The mean value of LVMI was 106.66 ± 22.98 g/m2. Patients were divided into groups of 115 g/m2 for males considered to be abnormal and 95 g/m2 for women. LVMI is closely correlated with SI and inversely with eGFR (corr. coeff: 0.358; p <0.05 or -0.526; p <0.001). In case of LVH, SI was significantly higher in both sexes (p = 0.005 in males, p = 0.04 in females). In case of higher LVMI, renal function was significantly lower (p = 0.002 in males, p = 0.01 in females). Metabolic syndrome occurred in several cases in both sexes with LVH, but the difference was only significant in male patients (males 6 vs. 10, p = 0.008; females 2 vs. 4, p = 0.29). In our follow-up study, the presence of LVH in men significantly reduced survival in both primary and secondary endpoints, whereas in women there was no significant difference. Conclusion: In IgAN decreasing of renal function is closely related to left ventricular hypertrophy and vascular stiffness, as well as a close relationship was found between LVMI and AS. Reduced renal function is associated with an increase in LVMI and an increase in AS, which may result in a worse prognosis for both CV and renal outcomes. The underlying role of all these can be assumed to be a common vascular and myocardial pathological remodeling.]

[In chronic kidney disease (CKD), the role of the kidney in assuring homeostasis is gradually deteriorating. Besides fluid, electrolyte and hormonal disturbances, detoxification and control of blood pressure is insufficient without external help. In children, in addition to achieving equilibrium it is also essential to ensure optimal physical and cognitive/psychological development. Adequate calorie intake is a major determinant of growth during infancy. Among the therapeutic options it is essential to ensure a proper diet. In addition to reflecting the special needs of renal failure in its composition, it must be palatable for the child. Children with kidney disease should have a normal energy diet. Protein intake should not be reduced from the baseline recommendation, but lower phosphorus and high bioavailability should be preferred. A low sodium and potassium diet is recommended for a significant proportion of patients and is based on dietary advice. Further, diet planning may be problematic if the child has special dietary requirements and is in need of nasogastric tube feeding. Because diet planning is a complex task, it is difficult to achieve optimal protein supply and mineral restriction along with high energy intake. In such cases, enteral nutrition with special formulas/ drinks developed for pediatric nutrition may provide a solution.]

[In the recent years, according to international and Hungarian guidelines, in addition to lifestyle modification, metformin is the preferred initial glucose-lowering drug for most people with type 2 diabetes, if not contraindicated. Sodium glucose co­transporter-2 inhibitors have been shown to reduce progression of chronic kidney disease, or kidney failure, as well as the risk of hospitalizations for congestive heart failure and (mainly in secondary prevention) cardiovascular death in patients with type 2 diabetes. For major adverse cardiovascular events and for the renoprotection, there seems to be no class effect. On the other hand, a class effect of sodium glucose co­transporter-2 inhibitors is evident for hospitalization for heart failure. In this review the authors summarize novel data about sodium glucose cotransporter-2 inhibitors, and about their new perspectives in the near future.]

[Epilepsy is one of the most common chronic neurological disease in childhood. Patients with epilepsy – even with so-called benign epilepsy – need medication for years. During this time, children go through a very big change, not only gaining weight and height, but also changing hormonal and metabolic processes. Maturation processes in different brain areas also take place at different rates depending on age. All of these should be considered when preparing a therapeutic plan. In everyday practice after the diagnosis of epilepsy, the applied drug is most often selected based on the shape and type of seizure. However, a number of other factors need to be considered when designing a therapeutic strategy: 1. efficacy (form of epilepsy, type of seizure), 2. age, gender, 3. pharmacological properties of the drug, 4. adverse drug reaction profile, 5. lifestyle (community), figure (skinny, corpulent, obese), 6. other comorbidities (nutrition, behavioral and learning problems, circulatory disorders, kidney or liver disease), 7. expected interactions with other drugs already used, 8. genetics, 9. other aspects (drug registration and prescription rules). The purpose of this article is to help to decide which antiepileptic drugs are expected to have the least side effects in a particular child with different comorbidities and which medications should be avoided if possible.]

To investigate the quality of sleep and the presence of Restless Legs Syndrome (RLS) in the Turkish population with β-thalassemia major (TM). The second aim was to assess the risk factors of RLS in TM adults. The study sample comprised of 121 patients at least 18 years old with TM. The patients’ socio-demographic information, body mass indexes (BMI), current medications, laboratory data were recorded. The patients were asked if they had a history of chronic kidney disease, diabetes mellitus (DM), and polyneuropathy. Restless legs syndrome was diagnosed according to the International Restless Legs Syndrome Study Group criteria. The sleep quality of the patients was assessed using the Pittsburgh Sleep Quality Index (PSQI) scale. The Epworth Sleepiness Scale (ESS) was used to assess excessive daytime sleepiness in the patients. The median age of the patients was 25 years (range 18-52). The mean BMI was 21.49±2.5 (R 14-26.5) for all patients. The prevalence of RLS was 5% in TM adult patients. The TM patients with RLS had no major complications of TM. The median PSQI global score of all patients was 3. Twenty-two (18.1%) patients had poor sleep quality. The reason for poor sleep quality was RLS symptoms in four patients (18%). There was no significant association between PSQI total score and blood parameters of the patients. Twelve (9.9%) patients had ESS scores greater than 10, which indicates excessive daytime sleepiness. The prevalence of RLS in TM patients was similar to that of the general Turkish adult population. These results indicate that RLS may occur in patients with TM, although they had a high level of serum ferritin.

[The reason of the unfavourable life expectancy of patients with chronic kidney disease (CKD) is not only the development of end-stage renal failure but the frequent appearance of cardiovascular diseases (CVD). Chronic kidney damage itself is a cardiovascular risk state and the occurrence of CVD/associated diseases is significantly higher in chronic kidney failure. Beside risk stratification and valid treatment of CVD (hypertension, diabetes mellitus, ischemic heart disease e.g.) we and the international nephrological community have left the cerebrovascular diseases of CKD patients out of consideration. However, up to 50% of patients suffering a stroke will die immediately, only 10% of stroke survivors can continue his/her profession, but the others will be permanently disabled. High blood pressure is a strong predictor of stroke and of other CVD in most of the patients. In stroke risk reduction it is particularly important to reach the target blood pressure values. The main object of the “Live under 140/90 mmHg” programme of the Hungarian Society of Hypertension is to familiarize with target blood pressure itself and how to reach target blood pressure. In 2010, prevention, early diagnosis and management of stroke are the most important challenges of this programme (The Brain Control Programme). We think it is advisable to prepare and publish a clinical practice guideline in collaboration with stroke societies which is similar to the guidelines of international societies and of the Hungarian Society of Stroke but specific for CKD patients. This guideline would help to give a uniform, up-to-date treatment for the cerebrovascular diseases of CKD patients.]

Elderly patients with end-stage renal disease, its epidemiology and questions regarding it in Hungary