How does the use of antiplatelet and anticoagulants affect the success of mechanical thrombectomy in acute ischemic stroke cases? 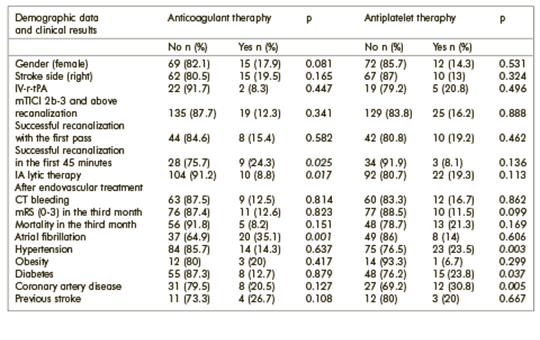 The weekly fluctuation in suicide rates is influenced by several factors including sex, psychiatric illness and alcohol dependence. The purpose of this study is to explore the impact of current alcohol use on suicid Data on sex, date of death, results of blood and/or urine alcohol tests and history of alcohol dependence in suicide victims over the 1997-2002 period were retrieved from a forensic database in two cities in Chuvash Republic. Over the six-year study period, 1,379 suicides were committed, 59% of them under the influence of alcohol. The peak incidence for men and women regardless of previous alcohol consumption was on Wednesdays and Mondays, respectively. The overall suicide rate was highest on Mondays and lowest on Thursdays. Both sexes were less likely to commit suicide during holidays than on weekends or workdays while intoxicated with alcohol. In this urban sample, the distribution of suicide across weekdays only partly followed the international pattern. The peak incidence of suicide showed sex difference, with the highest incidence for women on Mondays and for men on Wednesdays. The higher suicide rate on workdays might be accounted for by work-related stress, while the lower rate on weekends could be explained that people usually drink alcohol in the comforting company of family or friends, which reduces psychological tension and suicidal ideation. The majority of men consumed alcohol before committing suicide, regardless of the day of the week, while this observation was true for women only on Fridays and Sundays. Alcohol consumption greatly contributes to suicidal behavior in Chuvash Republic.

[Can we influence the negative drug attitude? Interpretation of the rejection of COVID-19 vaccine in the light of results of a pilot study ]

[Vaccination refusal is a serious obstacle to minimizing the spread of COVID-19. Nevertheless, the rejection of vaccine can be considered the result of a negative attitude towards medical treatment, and according to our previously published data, it can be influenced by the underlying affective state. Increased incidence of affective disorders and anxiety could be observed globally during the pandemic, which may have a significant impact on vaccination acceptance. The aim of our pilot study was to determine the association between clinical improvement of affective and neurocognitive symptoms and change of drug attitude and health control beliefs in a sample of psychiatric patients. A data set of 85 patients with psychiatric disorder has been analysed with the use of Patient’s Health Belief Questionnaire on Psychiatric Treatment (PHBQPT) with 5 subscales (Negative Aspect of Medication – NA; Positive Aspect of Medication – PA; Doctor health locus of control- Doctor HLOC; Internal HLOC; Psychological Reactance – PR); Hospital Anxiety Depression Scale (HADS-Anx; HADS-Dep) and neurocognitive tests, such as the Stroop test and the Trail Making Tests. All the tests were performed before and after a 14 days treatment. Paired t-tests and generalized linear models were performed to assess the associations between the variables. The baseline scores of NA and HADS-Anx correlated significantly (p=0.001) and after two weeks of treatment NA decreased (p=0.001), while Doctor HLOC and Internal HLOC increased (p=0.001 and p=0.006). The patients performance of the neurocognitive tests improved (all p<0.05). The reduction of HADS-Anx (p=0.002) and HADS-Dep (p=0.006) scores showed significant associations with the decrease of NA. Increase of the PA score was associated with reduction of HADS-Dep (p=0.028). Improvement of neurocognitive functions had no effect on PHBQPT scores. Important conclusions can be drawn regarding the rejection of the COVID-19 vaccine based on the associations found between the intensity of affective and anxiety symptoms and the attitude towards treatment. Our findings suggest that affective symptoms have a negative influence on the attitude towards treatment and that the improvement of these symptoms can facilitate the acceptance of the therapy, regardless of diagnosis. The modest effect of the improvement of neurocognitive functioning on the attitude towards drugs and the significant role of affective-emotional factors suggest that the accep­tance of vaccination probably cannot be facilitated solely with the aid of educational programs. Considering the increasing incidence of affective disorders during the COVID-19 pandemic, the screening of affective and anxiety symptoms and treatment of these disorders could be an important step towards the acceptance of the vaccine. Although psychiatry is not considered as a frontline care unit of the COVID cases, more attention is needed to pay on the availability of mental health services because refuse of vaccine can develop due to affective disorders too.]

[The aim of our research was to create a scoring system that predicts prognosis and recommends therapeutic options for patients with metastatic spine tumor. Increasing oncological treatment opportunities and prolonged survival have led to a growing need to address clinical symptoms caused by meta­stases of the primary tumor. Spinal metastases can cause a significant reduction in quality of life due to the caused neurological deficits. A scoring system that predicts prognosis with sufficient accuracy could help us to achieve personalised treatment options. Methods – We performed a retrospective clinical research of data from patients over 18 years of age who underwent surgery due to symptomatic spinal metastasis at the National Institute of Mental Disorders, Neurology and Neurosurgery between 2008 and 2018. Data from 454 patients were analysed. Survival analysis (Kaplan-Meier, log-rank, Cox model) was performed, network science-based correlation analysis was used to select the proper prognostic factors of our scoring system, such that its C value (predictive ability index) was maximized. Multivariate Cox analysis resulted in the identification of 5 independent prognostic factors (primary tumour type, age, ambulatory status, internal organ metastases, serum protein level). Our system predicted with an average accuracy of 70.6% over the 10-year study period. Our large case series of surgical dataset of patients with symptomatic spinal metastasis was used to create a risk calculator system that can help in the choice of therapy. Our risk calculator is also available online at https://emk.semmelweis.hu/gerincmet.]

Lymphopenia and tuberculous lymphadenitis under immunomodulatory agents in a multiple sclerosis patient: Follow-up of a challenging case

Interferon-beta (IFN-β) 1a and glatiramer acetate (GA) are first-line therapies for multiple sclerosis (MS) with immunomodulatory effects. We present a patient who developed lymphopenia and tuberculous lymphadenitis under treatment with these agents. The female patient who at present 65 year old is followed at our MS outpatient clinics had received GA (20 mg/day, subcutaneous injection) and later IFN-β 1a (44 µg, thrice weekly, subcutaneous injection). During the course of her treatment, she developed mild to severe lymphopenia. A follow up thoracic spinal MRI (when lymphocyte count was 800/µl) showed multiple enlarged lymph nodes in the posterior mediastinum incidentally. Further investigation revealed tuberculous lymphadenitis. She received anti-tuberculosis (TB) treatment for nine months and her condition resolved. Although immunomodulatory treatments are considered safe with regard to opportunistic infections, and lymphopenia under these treatments are generally accepted as mild and asymptomatic, our experience was different with this patient. Further studies on the management of patients with lymphopenia and assessment of the risk of TB under immunomodulatory agents are needed.

The applications of transcranial Doppler in ischemic stroke

Background: This overview provides a summary of the applications of transcranial Doppler (TCD) in ischemic stroke. Results: A fast-track neurovascular ultrasound protocol has been developed for detecting occlusion or stenosis. The technique is more reliable in the carotid area than in the posterior circulation. By monitoring the pulsatility index the in­crea­sed intracranial pressure can be diagnosed. TIBI score was developed for grading residual flow. TCD has been shown to accurately predict complete or any recanalization. Regarding recanalization, TCD has a sensitivity of 92%, a specificity of 88%, a positive predictive value of 96%, a negative predictive value of 78% and an overall accuracy of 91%, respectively. Sonothrombolysis seemed to be a promising application but randomized controlled trials have shown that it does not improve clinical outcome. TCD examination can detect microembolic signals (MES) which are associated with an increased risk of stroke. Micro­em­boli were detected in symptomatic and asymptomatic carotid artery stenosis and during carotid endarterectomy. The number of microemboli can be decreased by antithrombotic therapy. Contrast en­chan­ced examination and Valsalva maneuver with continuous TCD monitoring can accurately screen for right-to-left shunt.

Rapid changes of stroke management in recent years facilitate the need for accurate and easy-to-use screening methods for early detection of large vessel occlusion (LVO) in acute ischemic stroke (AIS). Our aim was to evaluate the ability of various stroke scales to discriminate an LVO in AIS. We have performed a cross-sectional, observational study based on a registry of consecutive patients with first ever AIS admitted up to 4.5 hours after symptom onset to a comprehensive stroke centre. The diagnostic capability of 14 stroke scales were investigated using receiver operating characteristic (ROC) analysis. Area under the curve (AUC) values of NIHSS, modified NIHSS, shortened NIHSS-EMS, sNIHSS-8, sNIHSS-5 and Rapid Arterial Occlusion Evaluation (RACE) scales were among the highest (>0.800 respectively). A total of 6 scales had cut-off values providing at least 80% specificity and 50% sensitivity, and 5 scales had cut-off values with at least 70% specificity and 75% sensitivity. Certain stroke scales may be suitable for discriminating an LVO in AIS. The NIHSS and modified NIHSS are primarily suitable for use in hospital settings. However, sNIHSS-EMS, sNIHSS-8, sNIHSS-5, RACE and 3-Item Stroke Scale (3I-SS) are easier to perform and interpret, hence their use may be more advantageous in the prehospital setting. Prospective (prehospital) validation of these scales could be the scope of future studies.

[In SARS-CoV-2 positive patients with corresponding neurological symptoms the presence of carotid bifurcation macrothrombus should always be considered. Hypercoagulopathy caused by viral endotheliitis, systemic inflammation and cytokine storm play an important role in its development. Here we present two patients treated with different treatment strategies because of carotid bifurcation macrothrombus as a complication of SARS-CoV-2 infection. In both cases, the soft macrothrombus was eliminated and the patients’ neurological condition were improved. Intravenous thrombolysis, acute carotid stenting with embolic filter protection device and mechanical thrombectomy with aspiration are effective treatments.]

[Practical aspects of anticoagulant treatment during the COVID-19 pandemic]

[Coronavirus infection has a multiple im­pact on the coagulation system and anti­coagulant therapies. Patients admitted with COVID-19 have un­usually high incidence of coagulation ab­normalities. The incidence of atrial fibrillation (AF) seems also to be more frequent among COVID-19 out- and especially in-patients. Among COVID-19 patients receiving oral anticoagulant therapy, for minimizing the risk of bleeding or thromboembolic complications there should also be considered the renal and hepatic functions and drug-drug interactions of oral anticoagulant and COVID-19 therapy. In case of direct anticoagulants, in addition to the benefits of better safety, more favorable treatment ad­he­rence, and fixed dosing, the use of this class of drugs does not require laboratory mo­nitoring of efficacy, which may be of exp­licit benefit in terms of social distancing and health network burdens. This study reviews the possible interactions of drugs used for viral infection and anticoagulation, and in addition to the issues of coagulopathy associated with COVID-19, we discuss also the concerning difficulties of continued anticoagulant therapy related to the social distancing measures.]

[Microglia may be the key to the Alzheimer’s disease]