[Subtype diagnosis, treatment, complications and outcomes of primary aldosteronism and future direction of research: a position statement and consensus of the Working Group on Endocrine Hypertension of the European Society of Hypertension – excerpts] 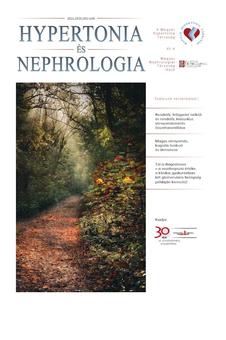 [In this review, the publications that established the value of renal biopsy in nephrology are referenced, the pathomechanism of lupus nephritis (LN) and IgA glomerulonephritis (IgAGN) is briefly summarized, and a detailed account is given on the previous and currently accepted classification systems of LN and IgAGN and on the prognostic relevance of these systems. ]

[The significance of hypertension as one of the major cardiovascular risk factor is unquestionable. By achieving target blood pressure values differentiated by age and comorbidities, the risk of cardiovascular events can be significantly reduced. However, it is essential to the quality of life the patient spends the extra years of life thus gained. This is a really complex issue affecting many co-disciplines, but one of the most important of these is the mental health, maintaining cognitive functions, and avoiding dementia. High blood pressure impairs the blood supply to the target organs, including the brain, by damaging the smooth muscle of the arteries and accelerating atherosclerosis, which increases the risk, the frequency and the severity of mental decline in proportion to the degree of tension. This means serious implications not only for the individual, but for the family and the society, as well. A particular contradiction is that treating blood pressure to the target range does not automatically means preserving cognitive functions and avoiding the risk of dementia. Meta-analyzes of large studies have shown differences between the individual antihypertensive groups have been confirmed in this respect as well. Inhibitors of the renin-angiotensin system and calcium antagonists – mainly dihydropyridines – appear to be a priority in this regard. The authors provide an overview of the relationship between hypertension and mental abilities, with a review of the literature on the effects of antihypertensive therapy, with particular reference to the effects on cognitive function and dementia. ]

In aging societies, the morbidity and mortality of dementia is increasing at a significant rate, thereby imposing burden on healthcare, economy and the society as well. Patients’ and caregivers’ quality of life and life expectancy are greatly determined by the early diagnosis and the initiation of available symptomatic treatments. Cholinesterase inhibitors and memantine have been the cornerstones of Alzheimer’s therapy for approximately two decades and over the years, more and more experience has been gained on their use in non-Alzheimer’s dementias too. The aim of our work was to provide a comprehensive summary about the use of cholinesterase inhibitors and memantine for the treatment of Alzheimer’s and non-Alzheimers’s dementias.

[The Multiple Sclerosis Registry of Szeged]

[Multiple sclerosis (MS) is a rare disease of the central nervous system considering the total population, the prevalence in Hungary is 83.9/100.000. The first MS registry was established in Denmark in the middle of the 1950’s. This was followed by the establishment of several national, then international databases with the number of enrolled patients in the hundred-thousands. At the beginning, the primary goal of the registries were the epidemiological surveys, focusing on the number of patients, the prevalence, the incidence, the mortality and the co-morbidity. As of today, however, with the rapid advancement and development of new disease modifying therapies (DMT) with different effectiveness and adverse reactions, the therapeutic use of the registries became even more essential: the modern, up-to-date, well established registries become integral part of the DMTs’ monitorization. The Multiple Sclerosis Registry of Szeged was first established as a “paper-based” database, then, in 2012, it was upgraded to an electronic, easily contactable and useable internet-based registry. As of today, it contains the socio-demographic and clinical data of more than 600 patients; we constantly add new patients as well as keep the registry up-to-date with the refreshment of old patients’ data. Aside from the “classical” clinical data, it can be used for the recording and assessment of the MRI scans and the data on psychopathological and quality of life assessments, which are becoming more and more important in everyday MS management. The establishment of the internet-based registry incredibly helped both the monitorization of the effectiveness of DMTs, and the success of the new epidemiological and psychopathological surveys. ]

A turning point in the approach to primary aldosteronism?