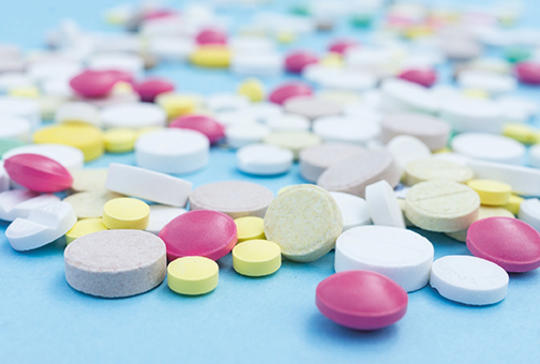 [Metamizole in use for almost 100 years, is reviving in our days since it has proved its efficiency and gained popularity during the past years. By its special triple effect (analgesic, antipyretic and spasmolytic) it has a wide range of indications. Among the non-opioid analgesics it is one of the most powerful painkillers. Metamizole is a prodrug, since it transforms into active metabolites within the human body. Its action mechanism is complex, not completely understood so far. Contrasted to classic non-steroidal anti-inflammatory drugs, metamizole has low anti-inflammatory effect. Its severe, but very rare side effect – i.e. the agranulocytosis - hindered its administration for years and even today it is under intense discussions. Based on international studies, it proved to be a well tolerable, safe medication. Its side effect profile differs from non-steroidal anti-inflammatory drugs, thus in NSAID contraindications it provides an excellent alternative. Its good water solubility makes metamizole suitable for both oral and parenteral administration. For its efficiency and good safety profile, metamizole has been correctly reintroduced to the supply of over-the-counter painkillers in our country.]

[Non-steroidal anti-inflammatory drugs (NSAIDs) are among the most common pain relief and anti-inflammatory medications all over the World, and many formulations are also available over-the-counter. Beyond the well-known gastrointestinal risks, emerging evidence supports increased incidence of cardiovascular events associated with the use of NSAIDs. This cardiovascular risk seems to be independent of the cyclooxygenase selectivity of these drugs. Distinct side effect profiles of various NSAIDs were summarized in a former issue of the Journal: LAM 2014;24(7): 327. In this paper, we aimed to summarize some of the yet unpublished results of a major research project of the European Medicines Agency (EMA), that was conducted in order to establish the relative risk of CV outcomes (myocardial infarction, ischaemic stroke and hospitalization for heart failure) associated with the use of various NSAIDs. In this epidemiological study, seven European healthcare databases on a source population of 35 million subjects were linked and analyzed. Most of the results are currently only available on the project homepage; however, analyses of heart failure data have already been published in a recent issue of The BMJ. ]

[The effect of nonsteroidal anti-inflammatory drugs on articular cartilage]

[In developed countries, the treatment of osteoarthritis costs up to 1-2% of the GNP. The poor hygroscopy of hyaline cartilage and of glycosaminoglycan (GAG) molecules that are components of proteoglycans plays a key role in the development of the disease. Age-related osteoarthritis mostly affects the weight-bearing joints of the lower extremities, the hips and knees, and - more frequently than the former ones - the small joints of the hands, causing chronic pain and disability. Nonsteroidal anti-inflammatory drugs (NSAIDs) used for the treatment of osteoarthritis-related pain influence not only pain but also cartilage metabolism, and - among others - GAG molecules. NSAIDs diminish the biosynthesis of prostaglandins (PG) that have a role in inflammatory processes, and influence oxygen free radicals, the levels of interleukins (ILs) and the function of metalloproteinases. The ideal NSAID for the joints stimulates cartilage formation, reduces cartilage resorption, and the level of katabolic cytokines. Aceclofenac was found to have the most beneficial effect on multiple aspects of cartilage metabolism.]

[During the past decade, a number of original publications, reviews and metaanalyses were published on the cardiovascular safety of nonsteroidal antiinflammatory drugs (NSAIDs). As this group of medicines is among the most frequently used ones and many preparations are available over the counter, it seems to be prudent to summarise the most important results on the safety of these drugs, and underline their potentially harmful cardiovascular side effects. Nevertheless, it can also be emphasized that there are substantial differences between different compounds, and the cardiovascular risk does not depend on the ratio of COX-1/COX-2 selectivity. Cardiovascular risk can be increased by all NSAIDs with the possible exception of naproxen.]

[Nonsteroidal antiinflammatory drugs (NSAIDs) are among the most frequently used medicines all over the world. In the year 2012 in the LAM, we summarized data on cardiovascular (CV) safety of these drugs. We emphasized that all NSAIDs may potentially be harmful on the CV system, as they can increase the blood pressure, the risk of coronary events (angina, myocardial infarction), and that of stroke, as well as they may deteriorate renal functions. We also outlined that in this respect there are substantial differences between different compounds, and the CV risk does not depend on the ratio of COX- 1/COX-2 selectivity. The newly available data of original papers and metaanalyses shed light on further details. Even naproxen which drug was previously considered the less harmful on CV system can increase the risk of blood pressure, stroke, and gastrointestinal (GI) complications. We have to emphasize that the most important risk of NSAIDs is still the GI bleeding. This adverse effect is significantly less for drugs which are more selective for COX-2 than COX-1 enzyme, but other, pleiotropic effects can also beneficially modify the GI as well as the CV risk. E.g. the aceclofenac was found to be among NSAIDs with the less adverse effects on GI system and is also among those having the less CV risk.]

[The risk of nonsteroidal antiinflammatory drugs]

[During the past ten years, a number of original publications, reviews and metaanalyses were published on the cardiovascular (CV) safety of nonsteroidal antiinflammatory drugs (NSAIDs). These data were summarised in several previous publications. As this group of medicines is very frequently used and many of them are available over the counter (OTC), their risks require particular attention. Recently, new analyses have been published on previously discussed preparations as well as on new drugs that had been omitted from previous analyses (paracetamol, aceclofenac), thus, it is important to review these data and draw attention again to differences in side effects among NSAIDs.]