[INTRODUCTION - Haematologic malignancies can originate from the skin (cutaneous lymphomas, rarely acute myelomonocytic leukemia) or can infiltrate the skin secondarily during the progression of the disease (nodal and systemic non-Hodgkin’s lymphomas, Hodgkin'’s disease, chronic lymphocytic leukemia). PATIENTS AND METHODS - The clinical history of seven patients treated by the authors between 1997-2003, is reviewed. CONCLUSIONS - The clinical and histopathologic features of each entity are discussed, emphasizing differences in the clinical course between cutaneous and nodal lymphomas, considering diagnostic difficulties, conventional and recent therapeutic approaches.]

[INTRODUCTION - The aim of our study was to explore school children'’s surmises on smoking. The following questions were in the focus of our analysis: what concepts children have about smoking and smoking-related diseases before adolescence? Have they already tried smoking? METHODS - The study was conducted among 3rd, 4th and 5th year school children (N=128) in two towns of Békés County, namely in Békés and Köröstarcsa. The sample consisted of 57% males and 43% females. Regarding sampling we followed international studies with similar aims where samples of 9-11-year-old average children were thought to be ideal for such study purpose using the draw-and-write technique. RESULTS - Most respondents from the study have not tried smoking yet. On the other hand, there are great number of adults who smoke in children’s environments, in many times, both parents do. Despite these facts, children’s attitudes toward smoking is rather negative. Children'’ s opinions reflect many negative aspects of smoking: the health-damaging effect, the financial aspects, the negative effects for social and physical environment. CONCLUSIONS - Similar to previous international studies, children of our sample possess correct and comprehensive knowledge of the smoking-related health problems. Findings of our study provides a support to the need of a smoking prevention program for children in the age of their negative opinions of smoking and well before the peer group effect is getting significant.]

[Type 1 diabetes is generally believed to be be the result of an immune destruction of pancreatic ßcells in genetically susceptible individuals exposed to environmental risk factors. To study the epidemiology of childhood-onset type 1 diabetes mellitus in Europe, the EURODIAB collaborative group established in 1988 prospective geographicallydefined registers of new cases diagnosed under 15 years of age. The 10-year-old study shows a greater than 10-fold range in incidence rate of childhood diabetes in Europe. The standardised average annual incidence rate during the period 1989-1998 ranged from 3,6 cases per 100 000 per year in Macedonia to 43,9 cases per 100 000 per year in Finland. Combined data from all centres indicates that the annual rate of increase in incidence was 3,2% but in some central and eastern European countries it was higher. The age-group-specific rates of increase were 5% for children aged 0-4 years, 3,7% for 5-9 years, and 2,1% for 10-14 years, which shows that the highest rates of increase occurred in the youngest age group. The Hungarian Childhood Diabetes Registry has collected the data of all newly diagnosed children with type 1 diabetes aged 0-14 years since 1st January 1978. The standardised incidence rate during the period 1978-2002 was 8,6 cases per 100000 per year, the lowest in the youngest (0-4 yr), highest in the10-14-year-old-children. There was a linear increasing trend in incidence with the average rate of annual increase of 5,1%. Comparing our incidence rate with other European countries Hungary belongs to the medium-risk countries with similar age- and sex-specific incidence rates. The results of the EURODIAB study confirm a very wide range of incidence rates of childhood type 1 diabetes within Europe and show that the increase in incidence varies from country to country. Such variation seems to be unlikely to be explained by genetic differences, since Europeans (except some small populations) are more homogeneous compared with other populations of other continents. The rapid increase in incidence may be explained by changes in environmental factors.]

[In chronic obstructive airway diseases there are several unsolved questions regarding the early diagnosis, monitoring treatment, simple detection of exacerbations and the questions of differential diagnosis. These problems indicate the need for the development of new diagnostic methods and their application in clinical practice. This need is further emphasized by the fact that in most chronic airway diseases, including asthma and chronic obstructive pulmonary disease inflammation has a central role in the pathomechanism and its suppression is the main aim of treatment, but so far, we do not have adequate method for the assessment of inflammation intensity in clinical practice. In recent decades non-invasive sampling techniques directly from the airways have made a progress in respiratory research and at present some of them are available for clinical use. Among these techniques sputum induction, measurement of exhaled biomarkers including exhaled nitric oxide and mediators in exhaled breath condensate samples are used increasingly. The present review summarises our current knowledge on these methods and the most important findings obtained by their applications.]

[Immunophenotyping is commonly used in evaluating malignancies of the lympho-hemopoietic system and its use in various disease states of mature lymphoid leukemias and related non-Hodgkin’s lymphomas is reviewed here. The major goals of immunophenotyping in mature lymphoid neoplasias are the assignment of abnormal cells to the B or T/NK linkage, their maturational analysis, and the characterization of specific phenotypes which might be helpful for the subclassification of disease. There is not known, however, any lymphoma (leukemia) -specific antigen and the individual type of lymphoid leukemias and lymphomas does not follow the antigen expression profile of normal differentiation. Therefore, the approach to analysis of lymphoid neoplasias requires thoughtful utilization of laboratory testing, in order to meet both medical and economic goals of the laboratory and caregivers. The interpreter should expect to see a pattern of both positive and negative immunoreactivities that is appropriate to the final interpretation. The value and type of information provided by immunophenotyping in these malignancies varies and this paper outlines approaches for clinicians and laboratorians to follow when reviewing clinical data. The future for this technology is outstanding because it is the only one available today that can both rapidly and accurately measure multiple correlated cell properties. However, combined clinical-laboratory approach to diagnosis and prognostication seems to be important including traditional and newer (molecular genetic, molecular biology) methodologies.]

[INTRODUCTION - Diffuse large B-cell lymphoma frequently has bone involvement, but primary bone lymphoma is rare (around 4% of primary extranodal lymphomas). Long bones are most often affected, followed in frequency by the ribs, vertebrae, and pelvic bones. The main symptom is bone pain. CASE REPORT - The case of a young man is presented whose disease started with lumboischialgia. Since rheumatological treatment did not relieve the symptoms, MRI was performed, which showed a tumour with massive iliac bone destruction. Three months after the initial symptoms a surgical biopsy from the right ilium showed diffuse large B-cell lymphoma. Soon after acute renal insufficiency developed and the patient was put on haemodialysis. Based on the findings the disease was staged as Ann Arbor IV/B (bone and kidney), ECOG PS 3, International Prognostic Index 4. On the basis of the preliminary histological findings, reduced-dose CHOP chemotherapy was given, which resulted in a significant improvement of the renal function and haemodialysis could be abandoned. This was followed by 6 additional cycles of Rituximab-CHOP treatment and further 2 cycles of Rituximab-DHAP salvage chemotherapy with intrathecal prophylaxis, and, finally, since no response could be detected, R-IVAC treatment was given. After an initial response, the disease became progressive, and the patient died 9 months after the diagnosis was made from a disseminated chemoresistant disease. Autopsy confirmed extensive infiltration of the right iliac bone, kidneys, bone marrow, spleen, supraclavicular and abdominal lymph nodes, pancreas, scalp and brain. CONCLUSIONS - This case was chosen to be presented because of the unusual localisation of the diffuse large B-cell lymphoma, the initial diagnostic difficulty, and the very rapid progression despite the application of several aggressive chemotherapy schemes. A primary bone large B-cell lymphoma represents a diagnostic challenge with its rheumatological symptoms thus delaying diagnosis.] 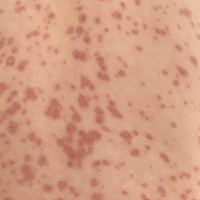 [A multicentre, randomised, crossover, double-necked trial of contamination of conventional and bow-tie dressings in routine obstetric and gynaecological practice]

[The role of transesophageal echocardiography in the investigation of stroke]

[The first 15 years of the AIDS epidemic ]