[The effects of inflammatory bowel disease on childbearing] 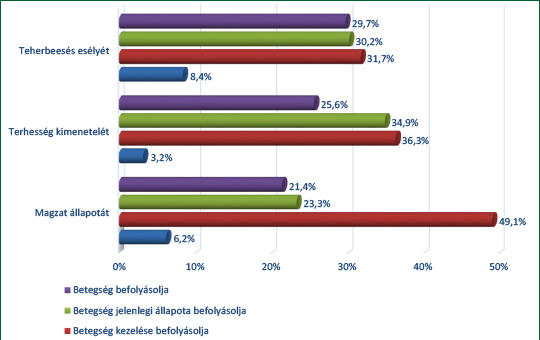 [The aim of the research is to assess the knowledge on childbearing of female patients diagnosed with inflammatory bowel disease (IBD), thereby understanding the effects of IBD on childbearing. The survey was conducted in 2021 from February to March, using a quantitative research method, not a random sampling technique. The self-designed, self-administered questionnaire was designed for those female members of the population who had previously been diagnosed with IBD (N=200 individuals). The processing and evaluation of the data and the examination of the hypotheses were made using descriptive statistics. 83% of the women in the study were between the ages of 18 and 40, and 65% would like to have a child. 40.5% of them received information about having a child, which affected 38.5% of them about the issue of having a child. According to 70.5% of the respondents, the condition of their illness and their medication has influence on the chances of getting pregnant, the outcome of the pregnancy and the condition of the fetus. Complications during previous pregnancy has affected 63.7% of respondents in the next childbirth. 63% of respondents stated that their awareness of illness negatively affects their mental state. Recommendations by an IBD care professional would be followed by 90.5% of respondents. Based on the results, it can be concluded that female patients with IBD would need additional information regarding both childbearing and their illness, and in addition, psychological support is of paramount importance.]

[Delirium is defined as a disturbance of consciousness and cognition that develops over a short period of time and fluctuates over time. During the last decade, the number of publications dealing with different aspects of delirium have been grown. The key points in most articles are pharmacological prevention and treatment, but because the rise of health care expenditures, all activities, which cost-effectively support the care process, is getting more and more important. The aim of the study: The aim of this research is to review the non-pharmacological prevention and treatment possibilities of delirium in elderly patients undergoing hip surgery. Systematic review, using articles published between 1999 and 2019 in PubMed and Wiley Online Libraries. Non-pharmacologic treatments significantly reduced the incidence (p=0.003–0.045) and duration (p=0.009–0.03) of delirium. The interventions also contributed to decrease the number of episodes (p=0.03), and to make the symptoms lighter. Early mobilisation and adequate fluid and electrolyte intake are key factors in reducing the incidence of delirium. Measuring oxygen saturation and support, appropriate nutrition, effective pain treatment, minimizing drug-interactions, maintaining good sleep and managing sensory dysfunctions have an effect on incidence, duration and severity of delirium.]

[Use of the ankle-brachial index in occupational healthcare]

[Elevated risk of fatal and non-fatal cardiovascular events is associated with high prevalence of peripheral arterial disease (PAD). Nurses working in occupational healthcare are ideally situated to identify individuals with undiagnosed PAD. The aim of the study: This study aimed to demonstrate that the ankle-brachial index (ABI) is a tool to be used by occupational health nurses in prevention of cardiovascular disease (CVD). A cross-sectional study was carried out with patients (N=638) from an occupational healthcare setting in 2021. The ABI was measured with an oscillometric blood pressure device. The measurements were analysed with the help of SPSS 22.0; descriptive statistics were calculated. A total of 638 patients were included. Mean age of the population studied was 46.5 ± 8.2 years; 38.4% were men and 61.6% were women. Mean ABI were 1.08 in right legs, 1.06 in left legs. Only 11 subjects (1.72%) had an ABI < 0.90. Occupational health nurses are able to identify key factors related to PAD, including use of the ABI, and to identify individuals with the disease. The determination of ABI using an oscillometric blood pressure device is feasible and easy to implement in occupational healthcare.]

[Results of a national survey in the field of primary care]

[To identify recent national trends in the employment and earnings of nursing personnel in primary healthcare and determine whether salaries and wage growth are associated with changes in the employment. The cross-sectional survey was conducted between 17 May 2021 and 17 June 2021 among nurses working in general, child and family practices, and dental practices selected using a random, sampling method (N=2007). The data gathering took place using a web-based, anonymous, self-completion questionnaire. The authors analysed the gathered data with Microsoft Excel 2007 and SPSS 22.0 software, employing descriptive statistical methods. Participants are highly experienced, with 80% reporting more than 16 years of experience. 7.9% of nurses are educated at or above the baccalaureate level. The majority (89.5%) work full-time as employees of their organizations (95.4%). The GP’s territorial care obligation disparities in nurses salaries documented here should spark healthcare policymakers to conduct pay equity assessments of employees’ salaries to identify and ameliorate pay inequality. The study findings also indicate that tailoring salaries to qualification for the individual nurses may aid in recruiting and retaining nurses in practice. ]

[The aim the present study was to assess the level of dental fear among 5-7 years old children and its correlations with dental-hygienic habits and their temperament. Furthermore, the relationship of the dental fear of parents and children was also analysed. This cross-sectional study was conducted by the means of a self-constructed questionnaire in 2017. The responses of 70 people were analysed with the help of SPSS 22.0; descriptive statistics, 2-sample T-probes, Mann-Whitney probes, analyses of variance and correlations were calculated (p<0.05). High level of dental fear was detected by 30% of the included children. There was no correlation between the dental fear of the parents and their children’s. Dental fear had no effect on the frequency of tooth-brushing. Children’s dental fear had no correlation with either previous painful experiences at the dentist’s or the temperament of the child. Dental fear is present among children and not only family but dental hygienists might play an important role in reducing it. ]

[INTRODUCTION - Inactivated influenza and H1N1 vaccination is recommended yearly for patients with inflammatory bowel disease receiving immunosuppressive therapy; however, immunomodulator and biological therapy might impair the immune response to the vaccination. In our study, we assessed whether immunity can develop in response to H1N1 influenza vaccination in patients receiving immunomodulator and/or biological therapy. We also assessed the occurrence of side effects after the immunisation in these patients. PATIENTS AND METHODS - In our prospective study, blood samples were obtained from 24 patients (12 Crohn’sdisease, 12 ulcerative colitis) one month after immunisation against influenza A/California/ 07/2009 (H1N1) virus. At the time of vaccination, all patients have been receiving immunomodulator and/or biological therapy for at least three month. Antiviral antibodies were detected by using microneutralisation assay. The safety of the vaccination was assessed by questionnaires. RESULTS - Every patient developed complete immunity against influenza A (H1N1) virus, independently from the type of immunosuppressive therapy. Regarding side effects, local symptoms occurred in six patients and systemic symptoms in another six patients. Mild diarrhea occurred in five patients. Moderate exacerbation of the disease was observed in 2 patients with Crohn’s disease and in one patient with ulcerative colitis. CONCLUSIONS - According to our results, immunocompromised patients with IBD can be safely advised to receive the vaccination. In our study, all patients developed adequate immunity according to microneutralisation titers.]

[THE GENETICS OF INFLAMMATORY BOWEL DISEASE]

[The pathogenesis of inflammatory bowel disease is only partly understood; various environmental and host factors (e.g., genetic, epithelial, immune and non-immune) are involved. It is a multifactorial polygenic disease probably with genetic heterogeneity; some genes confer susceptibility to IBD in general, while others specifically increase the risk of ulcerative colitis or Crohn's disease or affect location (localized or extensive) and/or behaviour (e.g., mild, severe, aggressive). This review presents recent advances in the genetics of inflammatory bowel disease including chromosome segments newly recognized to be involved in inflammatory bowel disease as well as the role of NOD2/CARD15, SLC22A4/A5 and DLG5. The increasing genetic information provides, for the time being, a better understanding of the pathogenesis of the disease thus setting a basis for potential targets for therapeutic intervention. In the future, however, genetics may also help in refining the diagnosis or predicting disease course.]

[Osteoporosis is commonly associated with certain gastrointestinal diseases. Osteoporosis occurs most often in patients with coeliac disease, inflammatory bowel disease, chronic liver disease and following gastric surgery. Prevention, diagnosis and therapy are based on the experiences with elderly and postmenopausal patients with osteoporosis. In this review, we summarise the clinical data regarding bone loss associated with gastrointestinal diseases.]

[MANAGEMENT OF GASTROINTESTINAL DISEASES DURING PREGNANCY]

[Medical treatment of gastrointestinal diseases has developed dramatically in the past 10 years. However, management of gastrointestinal disorders in pregnancy is still a serious challenge and requires special expertise. This paper provides recommendations on the indications of gastrointestinal endoscopy and treatment options based on the best available evidence, primarily from large retrospective studies and case reports. Currently there are no generally applicable, widely accepted, evidence-based guidelines available on the treatment of pregnant women. The risks of the gastrointestinal disease versus those of the medications used to treat it should be considered with regard to the health of both the mother and the foetus in each individual case. The risks and benefits of treatment and the consequences of withholding treatment should be discussed with the patient, the obstetrician and any other clinicians involved, and should be carefully documented.]

[Inflammatory bowel diseases (IBD) - ulcerative colitis and Crohn’s disease - are associated with increased risk for thrombotic complications both in the arterial and venous system. Cerebral sinus thrombosis is a rare but potentially fatal consequence of these diseases. Modern imaging methods made this uncommon complication of IBD more frequently recognized. The link between IBDs and thrombosis has been extensively studied. Inherited coagulation disorders (APC resistance, antithrombin III and protein-S deficiency), acquired diseases (antiphospholipid syndrome), and the frequent use of corticosteroids were suspected. Two cases of ulcerative colitis associated with cerebral sinusthrombosis successfully treated are reported. The connection between IBD and thrombotic complications and the therapeutic risks are discussed as well.]