[Previous studies have observed that prolonged adaptation to a face will bias the perception of a subsequent one. This phenomenon is known as figural or face after-effect. Although currently the topic of face adaptation enjoys utmost popularity, we still don't know much about the neural process underlying it. The aim of the present study was to determine, using transcranial direct current stimulation (tDCS), how the retinotopically organised primary visual cortex (V1) and higher-level, non-retinotopic right lateral temporo-parietal areas interact with facial adaptation processing. Seventeen healthy subjects recieved 10 min anodal, cathodal or sham stimulation over these areas during a facial adaptation task. Cathodal stimulation of the right temporo-parietal cortex reduces the magnitude of facial adaptation while stimulation over the V1 results in no significant effects. These data imply that mainly lateral temporo-parietal cortical areas play role in facial adaptation and in facial gender discrimination, supporting the idea that the observed after-effects are the result of high-level, configurational adaptation mechanisms.]

[Aim of the study - Presentation of diffusion tensor imaging (DTI) performed at low magnetic field (1 Tesla) in the algorithm of work-up of a patient suffering from severe traumatic brain injury (TBI). Method - DTI and functional MRI (fMRI) were applied at 1 Tesla for visualization of neural pathways and examination of sensory functions of a patient with severe TBI. DTI-measurement was also performed on a healthy patient for comparison. Results - DTI acquired at low magnetic field yielded appropriate visualization of neural pathways. DTI confirmed the results of the clinical and fMRI examinations in the patient suffering from severe TBI. Conclusion - An optimized DTI can be useful in the examination of patients with TBI, moreover, it may also help in the establishment of diagnoses of other central nervous system diseases affecting neuronal pathways. The presented results suggest that DTI of appropriate quality can be performed at low magnetic field.]

[Objective - The standard surgical procedures used in degenerative thoracic and lumbar spinal canal stenosis allows decompression of the neural structures by unroofing the spinal canal, often resulted in destruction or insufficiency of facet joints, sacrifice the interspinosus/supraspinosus ligament complexes and stripping of the paraspinal muscles altering an already pathologic biomechanical milieu causing segmental instability. Various less invasive techniques exists to save the integrity and prevent the instability of the spine and allow decompression of neural structures located in the spinal canal. The authors discusses the experiences with technique of unilateral laminotomy for bilateral decompression. Methods - The unilateral laminotomy for bilateral decompression technique was performed at 60 levels in 51 patients to decompress the symptomatic degenerative stenosis of the thoracic and lumbar spinal canal. The inclusion criteria were used as follows: symptoms of neurogenic claudication and/or radiculopathy, myelopathy, neuroimaging evidence of degenerative stenosis and absence of instability. Symptoms were considered refractory to nonsurgical conservative management or myelopathy was detected. Results - The distribution of mostly affected segments were the L 4-5 (45%) and L3-4 (28.4%). Neurogenic claudication and walking distance improved during the follow up period in all patients. Seven patients (13.73%) reported excellent, 32 (62.74%) good, 12 (23.53%) fair outcome and no patient a poor overall outcome. The low back pain was the major residual postoperative complaint. 25 (49%) patients were very satisfied with their outcome, 23 (45.1%) were fairly satisfied, 2 (3.9%) were not very satisfied and 1 (2%) patients was dissatisfied. Conclusion - The unilateral laminotomy for bilateral microdecompression technique minimizes resection of and injury to tissues not directly involved in the pathologic process, while affording a safe and through decompression of neural structures located in a degeneratively stenotic spinal canal.]

[Calcitonin-like receptor (CL-R) is a functional CGRP1- receptor when complexed with RAMP1 or an adrenomedullin-receptor or when complexed with RAMP2 or RAMP3. This study was carried out 1. to set up a method to examine the relative quantity of mRNA of CL-R, RAMP1, RAMP2 and RAMP3 in human coronary (CA), pulmonary (PA) and middle cerebral arteries (MCA), and 2. to examine the level of mRNA expression in cerebro- and cardiovascular diseases. The method was validated with respect to the use of postmortem tissue and we compared β-actin and GAPDH as housekeeping genes. There was no time-dependent change in total RNA and level of mRNA for β-actin or GAPDH could be detected in vessels removed from 1 and 5 days post mortem. The expression of β-actin appears lower in coronary artery than in pulmonary artery and middle cerebral artery with no significant difference for GAPDH; both worked well. There were some differences in mRNA expression for CL-R (higher) and RAMP3 (lower) in middle cerebral artery compared to coronary artery and pulmonary artery. There was no significant difference in mRNA for RAMP1 and RAMP2 in the three types of arteries. We did not observe any difference in mRNA for CL-R and RAMPs in arteries from patients with hemorrhagic stroke, arteriosclerosis and acute myocardial infarction when compared to patients without these diagnoses. Thus the mRNA expression seems to be unaltered in these disorders.]

[One-and-a-half syndrome is characterized by combination of the clinical features of unilateral horizontal gaze palsy and internuclear ophthalmoplegia. The common symptoms are double vision and oscillopsia. The lesion is located in the paramedian pontine reticular formation, involving the centre of horizontal gaze and medial longitudinal fasciculus. More extensive brainstem damage may result in additional neurological signs. The most frequent underlying diseases are vascular insults, multiple sclerosis, and brainstem tumor. We present two cases of one-and-a-half syndrome. Both patients had lacunar infarction in the paramedian pontine tegmentum, revealed by MRI. The first patient had isolated eye movement disorder, while the second had additional nuclear-type facial paresis. In the first case brainstem evoked potentials indicated brainstem damage, in the second patient it was normal. Ocular symptoms improved within some days in both patients.]

[Stress adaptation of te myocardium in the presence of systemic disorders]

[Effective therapeutic strategies for protecting the ischemic myocardium are much sought after. Ischemic heart disease in humans is a complex disorder often associated with other systemic diseases such as dyslipidemia, hypertension and diabetes mellitus exerting multiple biochemical effects on the myocardium. Ischemic preconditioning of myocardium is a well-described adaptive response where brief exposure to ischemia markedly enhances the ability of the heart to tolerate a subsequent ischemic episode. The underlying cellular and molecular mechanisms of pre conditioning have been extensively investigated in the hope of identifying new therapeutic approaches for the protection of the ischemic myocardium. However, most studies have been undertaken in animal models where ischemia was applied in the absence of other diseases, therefore the clinical relevance is questionable. In this article, we review different ways how systemic disease could modify preconditioning response and we also emphasise the importance of further pre-clinical studies for the specific examination of preconditioning in the presence of other complicating disease. ]

[Controlling pain has always been one of the biggest challenges of medical science. Despite pharmacological developments, still many patients suffer from long-lasting pain. During the last 40 years several surgical interventions have been used to modulate the activity of the central nervous system in order to control chronic, pharmacoresistant pain. Because such interventions may involve very serious adverse events, safer and at least equally efficient methods are still required. In the 90’s new techniques of non-invasive brain stimulation have been introduced that enable the facilitation or inhibition of distinct cortical areas. These methods are based on the electrical stimulation of brain structures and to date they have been successfully used to modulate perceptual, cognitive and motor functions in healthy subjects and various diseases as well. In this review we describe such techniques of non-invasive brain stimulation, namely repeated transcranial magnetic stimulation and transcranial direct current stimulation and review the current literature about their efficacy in controlling acute and chronic pain.]

[As a successor of the traditional biomedical approach the biopsychosocial model provides an explanation for the origin of diseases which does not only focus on the biologic aspects, but suggests the infl uence of psychological and social factors as well. Paradigm shift resulted enhanced physician-patient cooperation while treatments have been expanded with the consideration of psychological and social factors which enabled the multidisciplinary team to more precisely estimate the patient’s condition and suitability for treatment, therefore, comprehensive direction of intervention can be conducted. Reactions, adaptation and coping with cancer can be described as an interaction of individual level, which involves the psychological features of the person in addition with social level that can be explained by family context.] 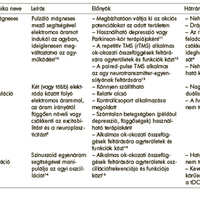